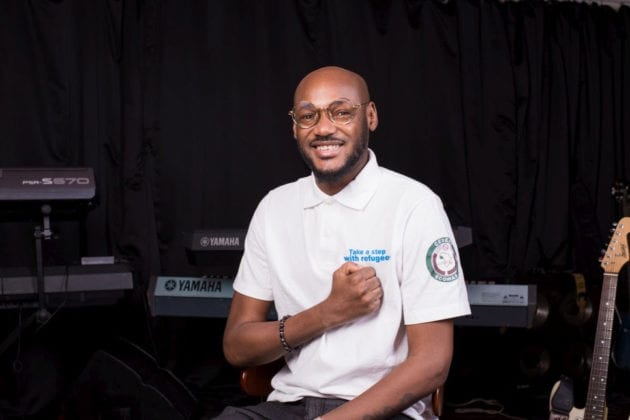 For the past three years, 2Baba has been a committed High-Level Supporter of UNHCR’s LuQuLuQu campaign - a pan-African movement of people from all walks of life investing in a better future for forcibly displaced people across the continent. In this role, he has dedicated his time to uplift the narrative of refugees and internally displaced persons (IDP) in Africa. In 2017, 2Baba visited IDP camps in north-eastern Nigeria’s Borno state.

“These families shared heart-breaking stories of watching loved ones being kidnapped or killed, forced to flee the comfort of their homes and leave everything they knew behind. I saw how they struggled to access basic things that we take for granted – like food, water, education and healthcare,” said 2Baba. “I witnessed UNHCR’s work firsthand during my visits and commend the organization for being on the frontlines, providing emergency relief and support to forcibly displaced families. I believe in this organization and I’m proud to be associated with UNHCR.”

2Baba is the first Nigerian to be appointed as a UNHCR Goodwill Ambassador.

“Nigeria hosts 60,239 refugees in south-east Nigeria and over 2.6 million internally displaced persons in north-east Nigeria.  With such staggering numbers of people forced to flee in Africa, 2Baba’s support and advocacy are instrumental for Nigeria and the continent,”  said Chansa Kapaya, the UNHCR Representative in Nigeria. “We look forward to his continued incredible commitment.”

As an Afropop music legend, 2Baba has given his voice to refugee and IDP causes. In 2017 he wrote and recorded, Hold My Hand, a song dedication to internally displaced persons, which helped raise funds for UNHCR’s humanitarian response. He has also generously contributed personal funds to support refugee and IDP families in Africa while continuing to use his celebrity status to raise awareness and support for UNHCR’s work.

“At a time when one percent of humanity has been forced to flee, we welcome 2Baba’s help in raising awareness and support for refugees and our cause,” said Dominique Hyde, UNHCR’s Director of External Relations. “We welcome 2Baba to the UNHCR family as a Goodwill Ambassador and commend him for being part of the movement challenging the narrative of the African refugee.”

The appointment of 2Baba comes as the world is facing unprecedented levels of forced displacement globally, with 79.5 million people forcibly displaced. More than 26.4 million people in Sub-Saharan Africa have been forced to flee their home, the largest number of displaced people in the world.