WayMaker by Sinach wins Song of the Year at the 2020 Dove Awards.

Congratulations are in order for Multi Award winning Recording Artist, Sinach as her hit single, "WayMaker" wins "Song Of The Year" at the 2020 Dove Awards. 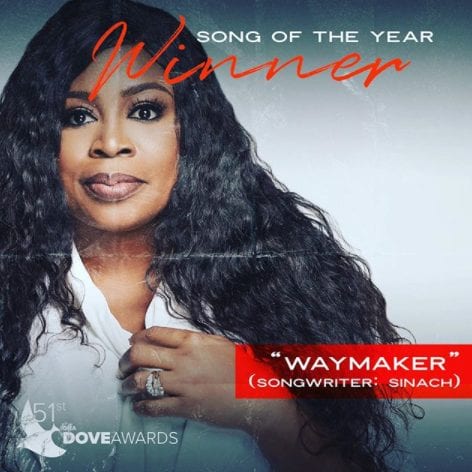 Osinachi Kalu Okoro Egbu popularly known as Sinach is the first artist from Nigeria to win the Song of the Year at the 2020 edition of the popular Dove Awards in the United States.

This is coming five years after it was first recorded in August 2015.

Sinach shares about the inspiration behind the song:  “At that time the Lord was taking me through processes, taking me through another level of ministry and I wasn’t quick to catch up. I was reluctant because I was comfortable where I was.
The Lord said, “No, it’s time to go.”

I was wasting time and the Lord pulled the rug from under me. He was telling me that he is the way maker, that he has already made a way for me where I was headed.
And he is a promise keeper, he is able to do this.”

The song would go on to gain worldwide popularity as many people embraced and have recorded it in different languages all around the world.

After the win was announced, Sinach took to her instagram page to share her excitement: “Thank you, Lord Jesus! You told me “I have made you a story of my grace and favour,” Sinach said. “I am grateful to my friend and my husband Joe Egbu. your support and love is a gift. To my little daughter RS Rhoda. Thank you to my mentor and life coach Pastor Chris Oyakhilome and my Loveworld family, you saw it before anyone saw it.
Thank you, Leeland for an amazing interpretation and your heart.
Thank you Mark and Les of Integrity Music.”

Way Maker has been covered by a number of globally acclaimed Christian music artists such as Michael W. Smith, Leeland; Christafari; Passion Worship Bank; Maranda Curtis;
and Bethel Music to mention a few.

Earlier in May 2020, two covers of ‘Way Maker’ by Michael W. Smith and Leeland were featured in the Billboard top 10 Hot Christian Songs chart. According to Billboard, It was the first time in the history of the Hot Christian songs that two versions of the same song have resided simultaneously in the top 10. Leeland’s version reached ninth on the chart, while Michael W. Smith’s version took the third position.