That Was Awkward! 5 Times Nigerian Musicians Had Such Moments

Nigerian musicians are definitely some of the best things to happen to the nation at large. They entertain us with their performances and personalities by giving us anthems and tunes for every moment. They've placed Nigeria on their backs and carried the nation far and wide to different parts of the world and they even enrich pockets of fans through generous giveaways.  But they're not perfect after all is said and done and are only human like the rest of us. As a result, they're prone to mistakes. So today the 18th of March being the Awkward Moments Day, we've made a list of some times our favourite Nigerian musicians were involved in an awkward moment.

1. The time Davido fell on stage at Kigali:

It's no new fact that Africans all over the continent love Nigerian musicians. So it was in front of an excited mammoth crowd in Kigali, Rwanda that the OBO had tripped on the last rung of the stage steps and fallen on stage after swaggering in with members of the crew to his Dami Duro hit. Awkwarddd...

Wizkid has gone from calling himself Starboy to being acknowledged as thus. This coming to term with his star power however didn't happen overnight yet it was to the surprise of most when fans dug up a video of Wizkid energetically grinding his waist in front of a crowd in a rather un-starboy like manner as he performed his hit record Wiz Party in front of VIP guests. Truly, as a then young Nigerian musician, his vigour wasn't out of the ordinary then but in retrospect, is very much an awkward moment so.

3. Brymo's awkward moment when he made a music video with just a pair of thongs on:

No, it wasn't for a remix of the thong song, it was Heya, a song that conveyed the different shades of human ignorance and backwardness of Nigerians. According to him, the thong represented the fact that we'd only evolved physically from pre-colonial times.

Many didn't see the art in his message and it caused quite a stir. To be fair, it was quite an eyeful of buttcheeks and was thought an awkward display at best.

4. That awkward moment at Felabration where Burna Boy was almost butt-naked

The pandemic might have robbed us of the joy of keeping Fela’s memory alive through his annual Felabration but we have memories of past ones and then his nomination into the Rock and Roll Hall of Fame.

There's also the memory of Grammy-awarded Burna Boy performing at Felabration in Felasque underpants as he bounced and sang his Run My Race to the crowd.

5. The moment Tiwa Savage struck a pose with a nip-slip

The African Bad Gyal, Tiwa Savage is undoubtedly one of the most successful artistes in the country. Her brand is however not just powerful and successful, but sexy and alluring as well with daring outfit choices. Well one time, her risque wardrobe disposition saw her posing in a picture with D’banj in a white bra that didn't grant full coverage to her nipples. Luckily, the Nigerian Twittersphere was not as wild then so her nip slip wasn't made into a subject of internet-based national zooming-in and discussion. 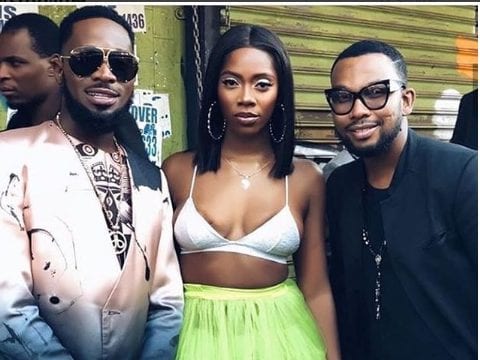 6. The awkward moment at the Headies Awards when Olamide had an outburst after Adekunle Gold was awarded

Several music lovers might have a problem with the Headies Awards show but very few will disagree that the 2016 edition was anything but sensational.

This is because, at the moment when Adekunle Gold went on stage with his YBNL family to receive the award for Best Alternative Act for Sade, Olamide had decided to borrow the microphone from him to express the fact that he thought his artiste, Lil Kesh was the deserving Next Rated Artiste and not the awarded Reekado Banks.

Adekunle Gold's action had mirrored the sentiments of his label boss, but a closer look at his face would tell you that he wasn't down for spotlights of the violent kind and felt awkward.

7. When Yemi Alade’s catsuit almost parted ways at a show:

Every December, show organisers partner with top artistes to ensure we're constantly in a festive mood. So it was at a festival in 2018 where Yemi Alade thrilled the audience with her usual spirited performance of her songs. The cries and calls of approval however changed later on as members of the crowd tried to let her know that her spangly catsuit was on the verge of parting ways from behind.

That moment was indeed awkward but eventually, when Yemi Alade had found out, she'd handled it like a true entertainer, throwing in a line of her near-miss wardrobe malfunction into Na Gode, the closing track for her set.

Well, which of these awkward moments had by Nigerian musicians do you think is the worst, did you witness any? Let's know in the comments below.