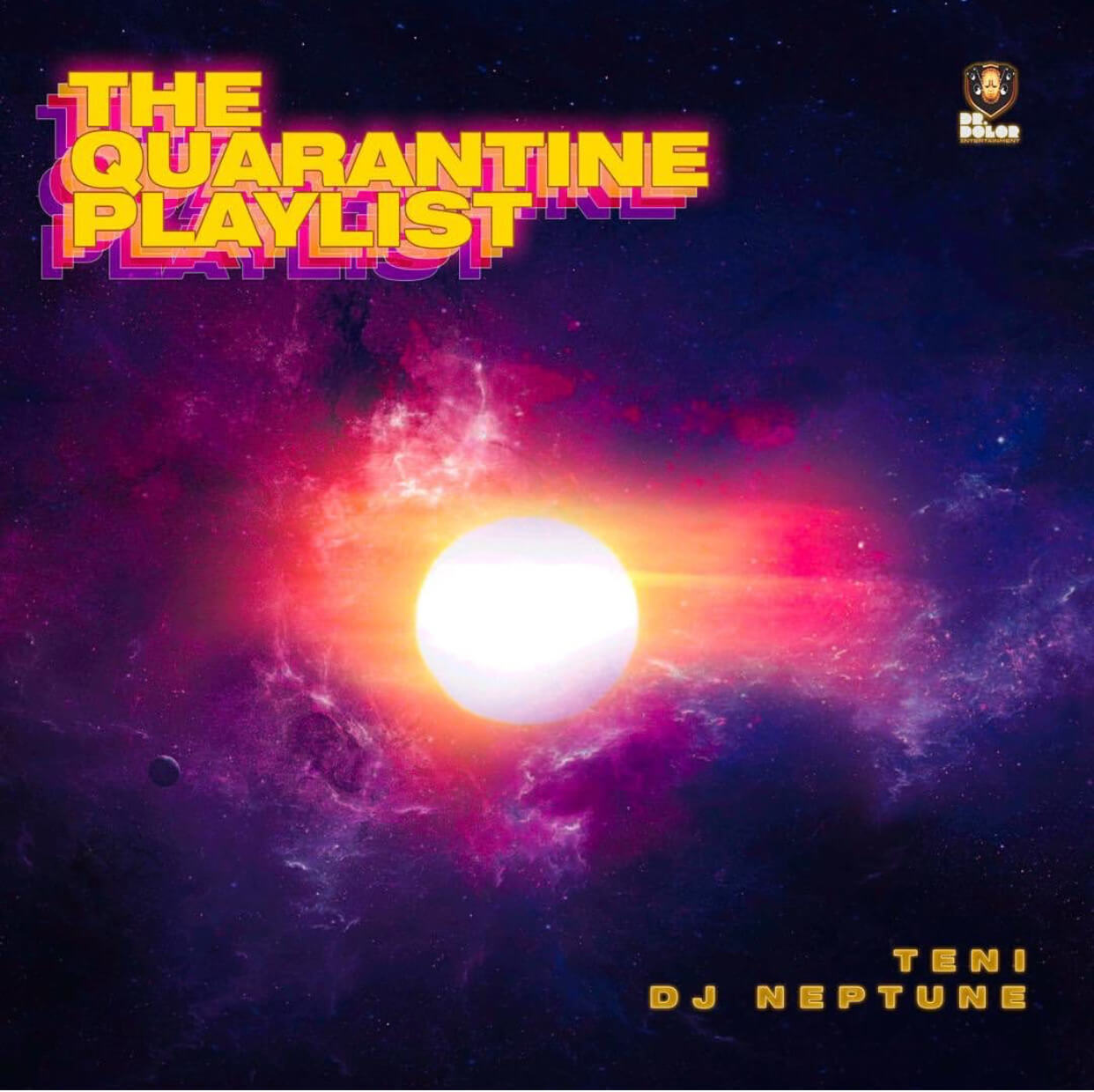 Featuring Teni & DJ Neptune's 'Quarantine Playlist', these are Nigerian EPs you should take the time to listen to in these times.

We live in such strange times. With all that's going on, there's so much space (and the time) for music to become even more significant in our daily lives.

If you're like me, you're on the lookout for something fresh and short, by way of a well-crafted EP.

Given to my own prejudices, these are some Nigerian EPs I'm feeling (been feeling). There's a lot of Hip Hop here from relatively new talents, and more than putting you onto their music, we're hoping you keep their names in mind, and whenever someone offers that ignorant "Hip Hop in Nigeria is dead" take, you know which names to mention, projects to recommend.

We've certainly got other stuff for you, from the Teni and Neptune EP to the debut project of 'The Live Report' producer Big Daddy Jayy.

A rapper amongst the talented folks at WeTalkSound, I came to the Inglorious M.O.B on LOFN3: A Collection of Love Stories, the collective's latest project. With the last song on that project, the rapper, with a grim voice and a lyricism which boasts the aggressive poetry of The Notorious B.I.G (an obvious influence in his music) had me sold on his shit.

Pyschi 2, the rapper's debut project, is a collection of 7 songs driven by the minimalism of its production and M.OB's unique lyricism which builds a world so convinced of its validity. Channeling black leaders like Martin Luther and Notorious B.I.G (who Inglorious connects to his own birth in a most novelistic fashion), whether it's on the ego-stroking "None", in which he repeatedly declares he has "no f**ks to give", or on the reflective nobody's-holy number "Addiction", the rapper keeps his lens trained on objects as a poet would, and with the delivery and production to match, Pyschi 2 is a slim work which packs so much experience in its 22 minutes.

So much experience it's ridiculous for a rapper who's in the first stage of what promises to be a great career.

The Inglorious M.O.B's debut official release which is also a sequel to one of his early mixtapes "Psychí" this is basically an introduction to M.O.B the rapper and a taste of what's to come

The Apata daughter is a most ingenious artist. Fusing the intricacies of genres like R&B and Pop (there's obvious traditional influences like Fuji and Highlife in her music, too), the singer has settled into a unique space in the industry.

She's recognized a talented singer, yes, but she doesn't bear the heavy stamp on genius, and this works because she's often allowed to be human, with mistakes and missteps. After a hit-laden 2018, the artist went through a mixed 2019, albeit releasing a 4-track EP Billionaire. Although it's title track did fine, the project's acclaim can be said to be less than satisfactory.

But Teni is Makanaki, and days into the pandemic–inspired lockdown (as ordered by the Federal Government), she partnered with DJ Neptune to release yet another 4-track EP.

The Quarantine Playlist is easily one of the best isolation-influenced pieces of music released to the public. Come for the star duo of Teni and Neptune, but stay for Teni's sweet serenading, her cunning songwriting which bares longing like a weapon. Shame this project didn't get it's due upon release, but you could always listen. It remains a most brilliant collective of short and sweet Afro Pop songs.

Since I first reviewed Oxlade's debut project, its acclaim has risen exponentially. Like many others locked inside their houses, I'm often given to Oxlade's sad love songs hidden in melodies pure and true. Whether it's the quiet opener "O2" which plays to the sensationalism of a lover, or "WEAKNESS", a Wande Coal–reminiscent song which tugs at the softest parts of one's emotions, Oxygene remains one of my favorite EPs, and that isn't changing anytime soon.

Nigerian music act Oxlade presents the release of his dazzling debut EP 'Oxygene'. Launched with the melodic, Spax-produced 'Away' Oxygene' sees summer arriving early with a selection of six vibrant tracks which offer a formal introduction to the talents of the exciting Lagos-based musician Oxlade, ahead of his inevitable and imminent ascension to stratospheric heights.

SoulBlackSheep, an Ibadan-raised artist and producer, has built a reputation in an underground scene for his dusty lo-fi and R&B/Soul records. His 7-track project, IT'S JUST LONELINESS, is an accomplished work of art, bold in its observation but subtle in sound, a piece which thrives in its production, a lick of delicate guitar strums and percussions. Alongside lone feature VRSD (who delivers a standout verse on "RAISED ON THE INTERNET"), SoulBlackSheep takes on themes like love, memory, lust, and its in-betweens. LONELINESS is a sensational pleasure, a record which quickly builds a rapport with the listener and holds hold dear.

LISTEN TO IT'S JUST LONELINESS ON SOUNDCLOUD

The oldest entry on this list, I feel like this 2019 Maka tape wasn't given enough credit. Like much of Maka's music, it delves into Soul/R&B and unearths some of the complex and crazy relationships are known to inspire.

On this collection (as its title suggests), Maka owes up to her shortcomings, revealing an honesty peculiar to artists who are female. With such a powerful voice, standouts like "Azu" and "This Way" (featuring a fine Blaqbonez verse) will hit so close to home for anyone who might be going through relationship palaver.

But Maka isn't all soft and surrender, she's powerful, and after 26 minutes listening to ITYIM, you'll feel a similar type of way too.

It's Not You; It's Me is a compilation of soulfully beautiful songs from love to everyday life created to soothe your mind, body and soul. Enjoy and share.

Samvsthekids is one talent I'm excited about. A rapper forged by ways of honesty, a lá Cole, he's prompted a unique start to his career. Last month, he surfaced amongst a wider radar of rap listeners when a beat he used for his song, "Suicide", was also tapped by M.I Abaga for a song off the legend's Judah EP.

Now, Sam has put out the Quarantine Music EP, 5 songs made special by sample-heavy production and the unwavering vision of Sam's lyricism.

The perfect soundtrack for the apocalypse.

DAP The Contract – The Powers Vol. 1

"I'll be damned if a nigga don't try", is just about the mantra of DAP The Contract, a US-based Nigerian rapper who's put out eight projects since 2017. In 2019, he delivered a standout verse on Show Dem Camp's Clone Wars 4 cut, "4th Republic".

The Powers. Vol. 1, his latest project, is a bubbly project which tries its hand at audacious art props (Latin Trap, spoken word, etc.) and for the most parts, succeeds at it. It should go without saying but DAP's rapping still gleams, and this project will have your hands hitting replay faster than your mind knows it.

PayBac iBoro thinks BarelyAnyHook is top 5 – bar for bar – in the land. That's not so hard to discern, really. Before his brilliant 'LUPITA' verse on the modern classic CULT!, the rapper flexed his lyricism over  a couple of Jidenna beats.

With 4 of the five songs on Nna, Jide from the 85 to Africa album, BarelyAnyHook flips the cross cultural sound to accommodate his smooth moving lyricism, an expertly blend of verbosity and groove. On "Classic Bouche", he delivers a verse that'll have your favorite rapper star struck, and on closer "Zodi Woman", he waxes poetic about a partner over the buttery production; and of course, Jidenna's singing.

For even the most uninterested listener, BarelyAnyHook's keen sense of sampling will have you deep in his world from the first bars he's rapping.

hold this till the project

I came by way of Eniola via a Twitter mention, a link to an album, and a promise of an enjoyable listen.

At first glance, I was taken by the artwork and its title, which suggested the creator finds his artistic impulses in the realities of Ebute-Meta and Compton, famous for being the stomping ground of American Hip Hop greats like Snoop Dogg, Ice Cube, and more recently, Kendrick Lamar. On this tape, it's the DAMN artist who Eniola most channels, his cinematic vision and robust sound.

Throughout this tape, you feel the thoughtfulness and urgency of a young man taking his neighborhood to the world, and drawing influences from great wells. I'm totally sold on Eniola Havoc, and he'll prove to be a rapper of some repute if he keeps his head right.

Ebute Meta like Compton, tale of the bold and fearless!

WeTalkSound, a 1000+ music collective, was founded in Ibadan by Dolapo Amusat. For about three years now, they've grown to emerge as one of the visible movements of an age that prides itself in collaboration and strong artistic impulses.

As part of an annual compilation album release, the third installment of their famed LOFN: A Collection of Love Stories, was put out earlier this year.

With songs which took on the complexity and lightness of love, the LOFN3 – with songs from acts like Vader The Wildcard, Meji, Dwin, the Stoic, Shakez, Mo Believe etc. – is easily their greatest artistic achievement yet, and as Dennis Ade Peter writes for the Native Mag, "a captivating, front-to-back experience."

LOFN 3 is the third project in the LOFN series. It's the biggest collaborative music project out of Nigeria. It involves the works of dozens of creatives making musical and visual art centered around the theme of Love.

Big Daddy Jayy has been the man behind the boards for most of veteran rapper A-Q's discography. Otherwise known by his producer name BeatsbyJayy, he's a most iconic presence in Nigerian Hip Hop production.

He however has some skills in the singing department, with a couple of loosies in the past and a hook on the A-Q and M.I joint tape he entirely produced.

Jayyinus, his debut project, is a brilliant piece. With very little skippable moments, the 6-track EP flits between an oeuvre of fascinating beats which brings out the raw and refreshing quality of Jayy's voice. Whether he's questioning a partner's love ("Let It Go") or delivering a take on Nigeria's sociopolitical concerns ("Casted"), he does commendably well.