This the only review of Show Dem Camp's new project, Clone Wars Vol 5 - The AlgoRhythm, you'd ever need to read before listening to the Album

Before diving into Show Dem Camp's Clone Wars Vol 5 - The Algorhythm Album Review, here's a quick back story: When M.I Abaga released You Rappers Should Fix Up Your Lives in October 2017, it inspired call-outs from a slew of Nigerian MCs. The records ranged from confrontational to introspective, gathering into a mood familiar to listeners who still keep an ear out for rap-related news. It's true that a high percentage of rappers haven't hacked the onus of creating music in the post-streaming era. It's also true that whatever qualifies as a Hip Hop culture in Nigeria is strained by structural flaws and rappers, with little funding and big egos, rappers have rarely reached the zenith of scene dominance, let alone on a national level. However in the past decade, there have been a select few who are unarguably great: M.I Abaga, Reminisce, Phyno, Ice Prince, and Olamide, whose continued reach for pop mastery is highlighted in UY Scuti, his ninth solo album. 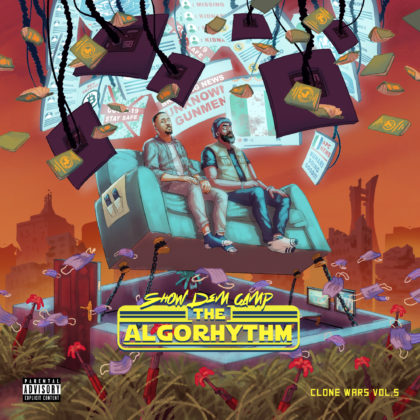 The Album Cover for Clone Wars Vol. 5 - The Algorhythm

There's another name in that class: Show Dem Camp. Since making their project debut with the 2010 tape Clone Wars 1, the duo of Tec and Ghost have owned a unique space in Nigerian music, expressing commercial awareness through the Palm Wine tapes, holding three consecutive festivals, and pulling together a community of young creators and committed fan bases.

Rhyming together for the better part of two decades, the duo has distilled their distinct souls into one, creating rap music that sounds nothing like anyone else. The bars are spiced with metaphors and relatable anecdotes, the beats epic, like the score of a superhero flick. These are the founding principles of the Clone Wars series, and four tapes say they’re great principles—blueprints, if we’re being honest. Small yarns and big observations meet, the core fans are saluted via code speak (“bang-bang” and “chappie” being prominent terms) and Nigeria, finally, can be discussed outside of blatant mockery or emotional tirades.

The first day of 2019 saw the release of These Buhari Times, a focused project which set the standard for rap releases that year. The pandemic necessitated a break from their prolific streak but even then they managed  That Year, a solemn classic cut from the fondest of memories. Fans craved new music. Seven months into 2021, the rappers have responded with fifteen tracks, again putting their impeccable discography to test.

After a speech opens Clone Wars Vol 5 - The Algorhythm, the tape rides out to YKTV, where the rappers are in their braggadocio mood while staying heady about civil issues. “Put on my covid mask, go murder a track,” roars Ghost on the hook, heading into the record with the might of a jaguar. Tec is as lively as a party's host, rapping about being “like Sango on the beat, I’m cooking up a storm.” The record recalls the mood-setting intent of Savage and gets you quickly interested in what the rest of the tape has to offer.

A quality that's been present in Show Dem Camp is their ability to create big moments on tracks, and they continue to do so here. FOCUS AND DRIVE, sees them perusing the deathly state of Nigeria and how one’s career is the likeliest escape from its rigors. “Climbing on these ladders of success, taking it one step at a time/two lions versus a hundred sheep, omo I like those odds,” raps Ghost, stirring imagery of himself and his rap partner united against all the fakes. On TYCOON, the rappers paint celebrity profiles on a beat that screams for Falz. They're pensive on NEW NORM, set by ominous, twinkly keys and clapping percussions. "Feel like Rotimi Amaechi, I want all the smoke," vows Ghost, taking on subjects many would rather have silenced. "And when they say 'tribe' I mean like minds," Tec clarifies in his verse, stabbing at a sensitive element towards national (dis)integration.

Themselves, they uphold the vision of uniting creative communities and that commitment influences the music process. On The Algorithm, the presence of collaborators props the narrative in zesty fashion, leading to a higher replay value. Ladipoe arrives ALIGN like a guest pastor, baptized in truth and fire. Set up by a Tec verse, he preaches the record’s uber-aware message, speaking to anyone doubting their potential for greatness (“sometimes your alter ego is the truest identity”) and ending his verse by crafting a relatable bar that plays on the record’s title (“even mechanics know that there’s no drive without alignment”). The trio of Ogranya, Alpha Ojini and Moss deliver fitfully on STREETS, a somber record that captures the multilayered issues plaguing the Nigerian society. Alpha’s fierce verse is brilliant, relaying a common frustration captured in the cheeky line “they see rappers when they see the youths.” MOJO, a beloved rapper in underground circles, gets a rare opportunity on TYCOON to spaz alongside the veteran Reminisce and he jumps at it, his verse blending a gritty Trap-reliant tone and youthful observations that elevate the mafioso-esque production. The host rappers are their starkest on HUMAN, complemented by Tomi Owo’s soulful vocals on the stirring hook. Fusing the meaning behind ‘human’ and ‘woman,’ they speak against gender-based violence on wax, as opposed to musicians who wouldn’t share a single tweet. “Shame on us/fellow men, the blame’s on us/Cos we keep raising cowards that can’t contain raw lust,” raps Ghost, critical of the patriarchy. “Miseducation demand that we heighten our senses/the struggle involves fighting all kinds of oppression.” In his verse, Tec blends history and perspective: “I’m hoping maybe my generation would be the change/‘cos our elders came and talked a good game but all have failed/so from my little corner I shall vent, speak power to truth and pray I don’t relent/we need to do it now, no more sitting on the fence/we need to realize our queens are really our greatest strength.”

The pair of Shalom Dubas and Tomi Thomas makes the most of their contributions as well. Dubas, on DRAW ME CLOSE raps with a distinct smoothness that underscores her talent, running a most impressive rhyme scheme all verse long. Terming her lyricism a “tec 9 in the shape of a mouth,” she promises a verbal onslaught from which competitors won’t survive. Thomas, whose Hopeless Romantic EP is an adequate demo for his musical skills, excellently contributes his Raggae edge on two tracks, minting melodious resistance on pre-album single RISE OF THE UNDERDOGS 2 and on VIPERS, where he’s joined by the reclusive Jesse Jagz who sounds more perceiving than he's been in a while: “Mama did you miss me/heard niggas dissed me/mind of a king, heart of a gypsy/I know that material things do not enrich me.”

The success of the series rests, as much, on production as it does the lyrics and features. These Buhari Times were modeled sparsely, built on Spax's deep-rooted signature drums. As opposed to that tightly controlled effort, the creation room for Show Dem Camp's New Album, Clone Wars Vol. 5 - The Algorhythm opens for gifted producers like Kid Konnect, T.U.C, Toyin Ores, Sichangi, and Inem Usoro, whose incorporation of Dancehall, electronic music and Trap builds on the tape's Hip Hop foundation; and Spax’s engineering of all sixteen tracks succeeds at cohesion.

Skits on 'The Algorhythm' Album

Complementing the beats are skits that are stitched along, imbibing the narrative with an outlier perspective. A fictional character who might (or might not be) based on a black billionaire, Big Liko, had introduced the project with a faux-caring speech delivered amidst the backdrop of cinematic chords and light percussions. Dialing in five tracks later on BIG LIKO (SKIT), his voice is familiar and tense enough to arouse genuine interest in his dealings (which, rather humorously, is about his nude picture floating the cyberspace). On BIG DREAM (SKIT) a character with a pronounced accent leads another monologue. He looks on every morning from his window, seeing Nigerians “thriving, innovating coming up with new ideas and only one thought crosses my mind—here he takes a pensive pause—how can I crush their dream today?”

Since CW3: The Recession standout Respect My Name when Tec rapped “this is what you get when you mix Fela with The Blueprint, referencing JAY-Z’s 2001 album, Show Dem Camp hasn’t denied that the Clone Wars series serve a double function: to flaunt supreme rap skill while speaking to the issues of contemporary Nigeria, frustrating as its politics can be. Their handling of light and heavy is just perfect, and one of the best games2 given on The Algorhythm happens to be on ALIGN: “forget December mehn, just Detty all year round.”

With every release including  Clone Wars Vol 5 - The Algorhythm, Show Dem Camp has flowed like the best of wines and here, their powers bring transcendence to their subjects, and with a roomful of creatives burning with desire to continue the tradition of a most iconic series, they’ve dug into produce an enduring project that speaks with heart and tact, at all times.