Should “Diet” Be Receiving The Same Attention As Olamide’s “Science Student”? 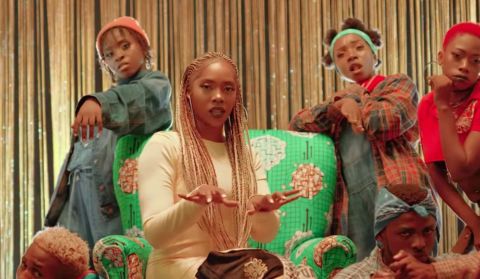 Four artistes recently released a new music video,  Tiwa Savage is one of them and the other three are DJ Enimoney,(who apparently is the owner of the song) Reminisce and Slimcase. The title of the song is Diet, released two months ago and the beat is dope and still fresh!!!

When I heard the song all I could think of, especially Tiwa’s line was, “babe stop killing it every time!” Yea, that’s what I thought until the lyrics sank in and I realized that we might be about to start another case of ethics in Nigeria music industry… or maybe not. Afterall the song escaped scrutiny once when it was released in January while some people faced and tried killing Olamide’s Science Student.

According to what the song was reportedly about when it was released in January,

“Diet” is a street slang for “take it easy” or “slow down” as to take our minds away from the extreme thoughts of survival.

This explanation doesn’t correlate with what diet truly means even though it is supposed to be a slang.

Listening to the song again, I realized the Codeine they’re singing about is the same Codeine that is supposedly ruining the lives of our youths who find great pleasure in abusing drugs… what a latecomer.  I can hear someone saying

Yes, I know, but I also know that the only thing everyone can sing for now is “On a Codeine Diet” because that’s what on repeat… even in my head as I’ve also watched the video and a lot of people just did too because it is trending on YouTube with over 150k views in its 24 hours release.

Truth is, there’s a lot of confusion in this song, which goes to show what some of our songs as Nigerians are becoming. This 3:19 long video/song started with “Tiwa Savage” followed by Reminisce’s verse where he happens to be telling people that he is on a Codeine Diet hence everybody should keep quiet… right? Truth is, he also killed his part in terms of delivery, but what’s the message?

Not to assume that everybody knows what Codeine is, let’s get a meaning, shall we? Codeine is a drug and according to addictioncentre.com

Codeine use often starts out innocently enough with a prescription for a codeine-based cough syrup. Because codeine is less regulated than some opiates considered to be more dangerous (such as morphine and OxyContin), getting and abusing it is relatively easy.

Now, some people might want to say they were referring to another kind of Codeine because we like giving excuses for our favourite artistes, but guess what? they showed us with the bottle and a man inside symbolizing how addicted whoever is in that bottle is, and you know? that person shown is supposed to be on this codeine diet. This means that Tiwa Savage, who is part of the people mentioned in this video is also on a codeine diet. Hmmm! Is that what you also think? Not really, hers is protein and maybe Codeine too.

Olamide’s Science student’s video is 7:36 long and in that time Olamide informs us about how people, especially the youths are mixing chemicals all in the name to get high with his video graphically showing us the effect of drugs and why it should be stopped. It looks like our first lady, Tiwa Savage and her codeine diet crew have successfully defeated the message Olamide passed in his song giving the youths reason to take drugs by glorifying the drug and its effect… Maybe that’s not what they meant to achieve but most of us see just that.

Although Olamide’s message wasn’t presented this way, he was criticized nevertheless and his song even was declared unfit for broadcast by NBC. You’ll agree with me that Science Student has good content and message contrary to the views of some people. The song used terminologies that are derogatory to the usage of addictive drugs and using himself as the narrator, a good song interpreter could tell he is telling us the negative effects of drugs.

Diet seems to have done quite the opposite which is really confusing because the lyrics are sort of promoting drugs especially as all the artistes’ names are mentioned and followed with “on a codeine diet” line, in this way, showing fans they’re also getting high on the same drug.

While the song has better beats than lyrics,(My opinion), we can all agree that Tiwa Savage killed her lines and from reviews, it’s obvious a lot of people are singing this song because of her and replaying her part. But guess what? it isn’t entirely because of the content of the song, it is its rendition and the person rendering it (First lady).

Tiwa killed that verse truth be told, but let’s look past the melody in the verse and let’s look at the content of the verse. Tiwa started with “she’s on a protein diet” and drinking what we are supposed to see as milk… that’s milk, right? because what to believe about this song is uncertain considering Reminisce was seen earlier carrying a cup full of smoke. What’s that? and while we are working with slangs, what’s in Tiwa’s “protein” cup? ?

So, I ask again? Should this song gain same attention Olamide’s Science Student got? Attention in terms of scrutiny and explanation? I say yes.  Yes because if not it will confuse our youths. It’ll confuse people who will go from just singing “On a codeine diet” to actually be on a codeine diet… and ladies going on a strict protein diet. I want to believe our artiste care enough about their fans to know that their actions and songs have ways of influencing them. I hope.

We all know you want to jump on the Legbegbe train and give your fans something trendy they can rock to, but also try to give them something that won’t make them worse than they might already be. Not cool.

There’s a great possibility this post will come with defence from artistes and fans alike and it’s fine. I look forward to being corrected and given another side to this song than I already have because the only part they might want to justify this song with might be where they said “Slow down on the codeine diet” but Kolewerk!

That part means nothing. It’s less than five seconds in a 3 minutes plus song/video repeated like twice or three times, so it definitely isn’t supposed to be the message of the song, plus they might want to point out to the “Say no to drugs” which was also flashed on the screen on the bottle of the codeine; a message that might not be seen by anyone and wouldn’t have been seen by me if I was not on a hunt to justify this song but found none.

So guess who this song is meant for? Guess the people that will appreciate this song? Codeine users… and protein! They’ve found a song specially made for them, a song I believe the artistes should have been wise enough to cover the whole screen with “Say no to drugs” considering the backlash Olamide received, that is if that was the intention. Rather they placed it in a way whereby the Codeine users would’ve been so wasted like the guy that fell in the video and he wouldn’t be able to see well. Please, how do you expect him to see the tiny inscription on a bottle saying “Say no to drugs”? … you guys can do better.

So, the artistes in this song, DJ Enimoney, Tiwa Savage, Reminisce and Slimcase should please let us know if they’re promoting Codeine or not because right now if we’re looking at what comes as a red flag on NBC’s radar, this song is looking like one of them. Does being on a codeine diet to them mean staying away from codeine or taking strictly codeine because normally when you’re dieting on something like Tiwa Savage’s protein diet, all you’ll take is protein which I believe is why she was seen taking what is supposed to be milk or whatever it is which I believe you know.

So I ask again, should this song receive the same scrutiny Olamide’s Science student received? Click here to listen, enjoy it and let us know what you think.

P.S: It looks like the video belongs to everyone because it seems to be featuring everyone even DJ Enimoney that is supposed to be the owner of the song and I called it Tiwa’s because despite how short her part is, the video is on her own YouTube page with presently 155k views.