On Burna Boy & Sowore: What Can Be Done For Nigeria? 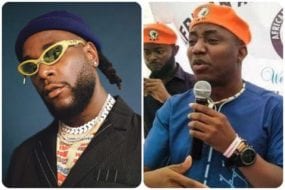 I've been reading Michela Wrong's “In the Footsteps of Mr. Kurtz.” It's a book which chronicles, in fleshy and informative detail, the rise and fall of Congo's Mobutu Sese Seko, dubbed on the cover as Africa's most extraordinary dictator.

In its pages, I find so many similarities with Nigeria, especially as the country leads to the Independence Day on October 1st. Systematically and brutally, Mobutu ripped off a very rich nation blessed with numerous natural resources. As all collapsed around him, he stole some more and held on to his wealth till his last breath. A chapter on the dilapidation of the dreaded Mama Yemo's Hospital had me close to tears. Every scene, every plunder of the earth, every audacious move by Mobutu and his careless elites, was eerily similar to Nigeria's situation.

Burna Boy comes into this, not as a scapegoat or substitute for the failure of the nation's leaders since 1960 (and even further back, some would say, when colonial Nigeria was partitioned into provinces) but as an aware Nigerian. All too often we're confronted with the bleakness of our present and future that we keep silent. Suffer through each harsh policy. Suffer through the costly bags of rice and zero employment and SARS and the Police killing our young. Suffer through the news of yet another government official who stole. We suffer so much it becomes normal and, to many, the first call to fight against that destructive normal, will be met with hostility.

To them, it suggests two things:

1. That they're somehow responsible for the Nigerian problem and

2.) You're hoping they get tortured or worse, killed.

We know all too well the scale of Nigeria's democracy, how no one's really safe from its craze. Fela Kuti, the chief tormentor of Nigeria's government for many years, dubbed the system “Demo-crazy.” It's clear to see why he said so: Since 1960, I can perhaps fill a building with newspapers that have carried reports of electoral malpractice, the near devilish desire to get into political office only to get one's slice of the so-called national cake.

Let's return to Burna Boy: the popstar has often clashed with Nigerians over his bold opinions on what needs to be done about the problem. Earlier this year, another political opinion was prompted by the mass persecution of actress Funke Akindele when she flouted lockdown rules. In a gruel sarcastic tone, he asked Nigerians to address national matters with “the same energy,” predicting suffering for the masses if that isn't done.

Of course, there's no real pressure on Burna Boy to march millions of people to Aso Rock and demand freedom from the powers. Fela Kuti might be his biggest musical influence and that explains why he's often in the spotlight: He's an aware Nigerian. And the aware Nigerian will never keep quiet. He will always feel his comrades aren't risking enough for their futures. He will speak but will he act? That's another issue.

As you probably expected, this piece is not an outright call for Burna Boy to protest. Rather it's a kindling of a much larger flame, that of the general populace. I think we're too unconcerned about our death. Like Mobutu who gave presents everywhere he went, we think splashing the personal cash (for those who have it) will erase the bigger structural issues. Many Nigerians think they'll evade Nigeria when they become rich. Many Nigerians don't stop to think of how they'll become rich; do they, I wonder, think of the many ways the country is set up to make us suffer, quieten and eventually fail? If we knew, I wonder, perhaps we'll be more deliberate with how we push these conversations? More deliberate with how we interact within a failed state, knowing well many of its citizens are dying.

Honestly, it hurts to see everything taken for “cruise” in Nigeria. For myself who lives in Ajegunle, it's triggering to see people laugh about the realities of millions of Nigerians who can neither afford dinner or a phone. They couldn't speak out if they wanted to. In some way, it falls to the Aware Nigerian to level the disconnect between that Nigerian and what goes on in the country.

Yesterday was an important conversation that needed to be had. Burna Boy might not be Malcolm X but I don't see the wrong in asking him to step up to his voice, especially when the person doing the asking is playing his part. Some think Sowore is a part of the selfish political class. I'll do some reading on the man, as you should too. Let's educate ourselves on how best to engage the government even as we go about our personal goals. In a country with as many regular people and music celebrities as Nigeria, it reeks of dishonesty to suggest the second class hasn't benefited from the first, who attends their events and patronizes the music. And it'll reek even more to shoot down any conversation that could possibly lead to mass awareness. Everything's falling, baby, and you want to be funny?

Michela Wrong might have captured in words one African nation's brutal history and one dictator's mission to enrich himself. But look around and ask if Nigeria looks like a joke. In many ways are we similar to Congo, who it took many years (more than three decades) to unseat Mobutu but even then, his corruption had eaten deep into that country. The Nigerian dream might be leaving but let's not pretend the reality sucks. The reality is far more gruesome than the Twitter LOLs and RTs and memes will have you believe.

I'll end with a quote within Mr. Kurtz. It's attributed to Gaston Muyombo, a Catholic priest, who termed the civilian approach to politics in Congo as “Bantu philosophy”. He said: “People cling to life and are not yet at the stage where they will fight for the quality of that life. They feel as long as they are surviving, that is enough.”