2020 was quite the year and none of us will be forgetting it in a hurry. COVID-19 restrictions had us far apart from our loved ones and even farther from our beloved celebrities. Thankfully, where mankind exists, so does innovation and via the internet, we were able to stay connected to our favourite artistes via their music, social media, online performances and even take front stage with social media challenges they put up. 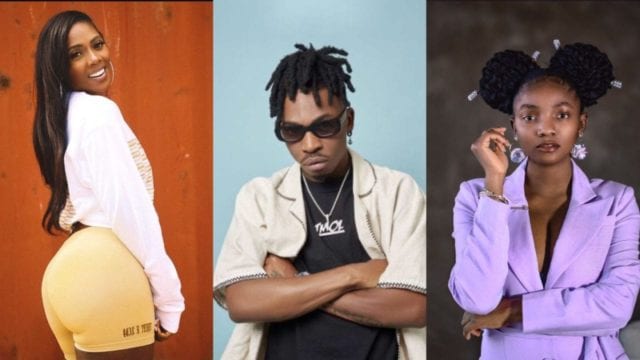 As we wrap up the year, here are 10 social media music challenges and campaigns that made the online sphere alive in 2020:

When Simi married beau, Adekunle Gold, it was a private affair that had the curiosity of their fans at the highest point. But that wasn't the case for her pregnancy which was a nationwide affair thanks to the 'Duduke' challenge that saw everyone cradling baby bumps both real and improvised.

#DudukeChallenge They said "Simi can we see you dancing?" 😂

The teaser video was done in a TikTok-esque manner and then the opening lines said 'I no come to life to suffer.' That was all Nigerians needed to jump on the song and turn it into a TikTok sensation.

Hey Savage Kings ⚔️ Queens. Koroba is out !! Duet my video let’s see who can do it better. #Koroba #TiwaSavage

Released January this year, this record was one of the biggest songs out and topped several charts, it was only befitting that it was also made into one of the biggest freestyle challenges as well and it had everyone showing up and showing out with their best lyrics.

Thanks to this song, countless Nigerians have slowed down their fast-paced life as they proceed to fill every social media platform with slow-mo videos to the lines of the song.

This year, the relationship arm of social media outdid themselves and had single people hungering to be booed up as well. Ladipoe and Simi’s ‘Know You’ was one of the songs that stoked these flames as several lovers made cute videos acting out the lines of the song.

It came from South Africa and touched down in Nigeria as well as other parts of the world and made another trip round the globe with the Burna-Boy assisted remix and the easy-to-imitate dance steps that were inspired by a group of Angolan dancers.

This challenge made our lockdown days a little brighter and actually challenged Nigerians everywhere to dress up even when they had nowhere to go.

Another ray of light during dark lockdown days, this challenge brought out the best in our makeup artistes and had them contouring like never before as they created looks upon looks in a bid to win the 100, 000 dollars price money attached to the challenge.

9. In My Maserati- Olakira:

The offer to ride in a Maserati was one numerous Nigerians couldn’t resist so they took Olakira seriously and not only made the song a chart-topping hit but also made a viral dance move out of it.

Blaqbonez has not only earned chops for being one of the best rappers out in recent times but has proved to be an entertainer as well and has seamlessly converted his humour into a marketing strategy for his music.

First there was his #streamhaba campaign and now his latest campaign to stream 'BBC' also comes with a slow-mo challenge which his peers like Oxlade and Laycon have jumped on.

Did you participate in any music challenges this year? Did they make our list and which of the ones on our list are your favourites?