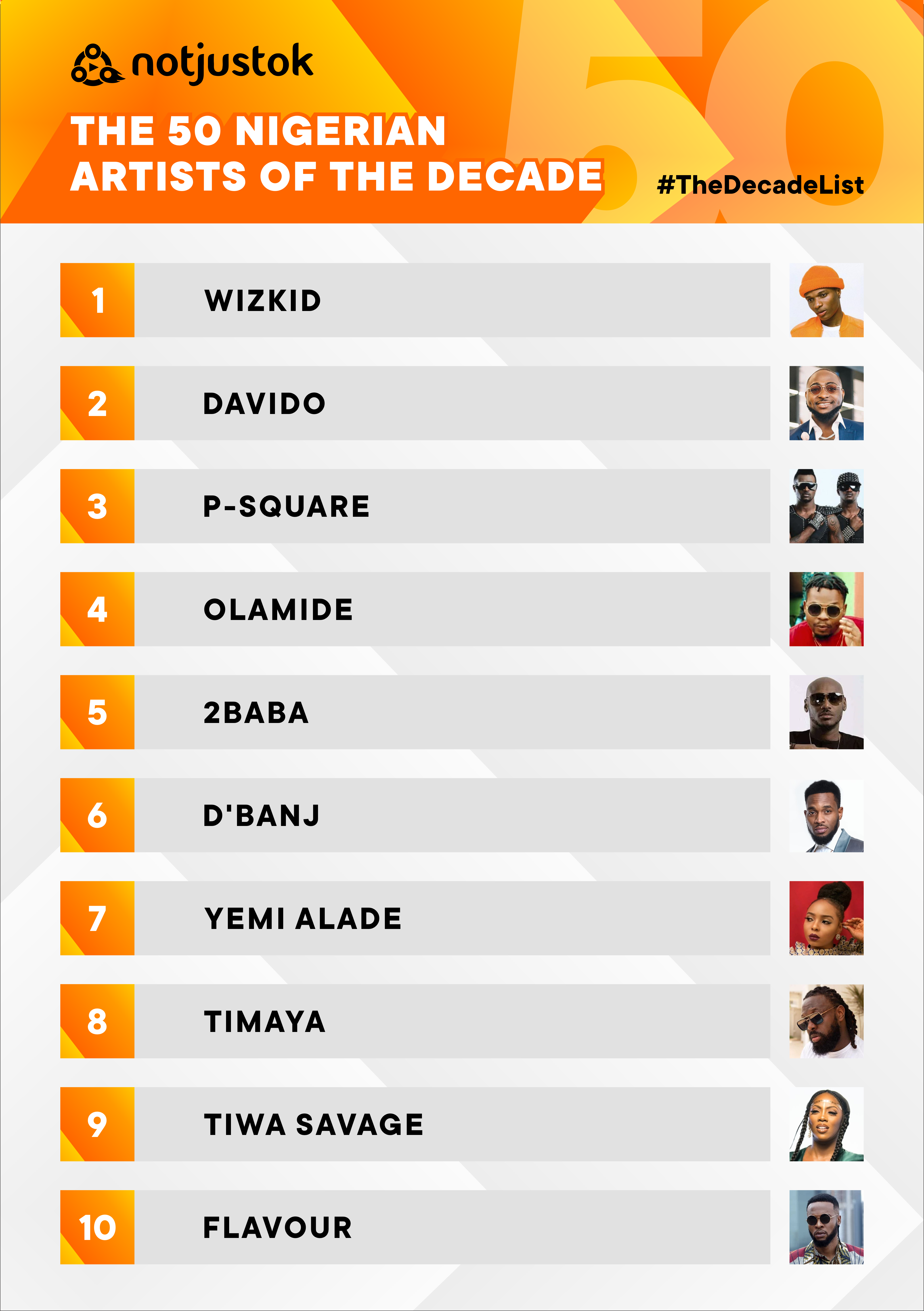 The Afro Highlife maestro has grown to become the greatest contemporary artiste to come out of the region. Flavour, complete with his artistic brilliance and a well-chiselled body, has found his way into the hearts of music lovers worldwide. His overall influence is marked by the immensity of his brand in the South East of Nigeria especially, where his face can be found at highways, smiling, willing you to buy a beer or whatever.

Signing with Mavin Records in 2012, Tiwa Savage would go on to release three projects which established her place firmly amongst the greats of her time. She has since left Mavin Records, signing a deal with Universal Music Group.

The Bayelsa-born artiste is a 14-year veteran who’s ascended to the top of Dancehall dominance. Timaya ushered in a new age, infusing his inherent Afropop sensibilities to Dancehall; when packaged, and exported to foreign markets, Timaya’s OG level is reflected in his constant effort to grow. He’s also floated the DM Records Limited, and has helped artistes like Patoranking and King Perryy to mainstream recognition.

The energetic performer has contributed to the growth of a sub-genre of music which settles between Afrobeats and Afro Pop. But really, her sound is a reflection of her personality; a tireless artiste, she has risen from being the winner of the 2009 Peak Talent Show to being one of Africa’s biggest artistes, releasing singles and albums that have propelled her to superstar fame and success. Her song, Johnny, with 110 Million YouTube views, is possibly the biggest Nigerian song/visual in the last decade.

‘Oliver Twist’ was a reward for D’banj’s efforts on the home scene (his consistent streams of quality songs and albums; becoming the star of Mo’ Hits.) Outside the country, he got a GOOD Music deal with Kanye West, and a Jesus Piece. More than most artistes, D’banj has influenced the Afropop genre, with his energetic voice and charisma – prop to his ‘The Entertainer’ moniker.

This legend’s influence cannot be overstated: across the continent and beyond, he has continued to earn plaudits. A proper artiste, he has spent the decade releasing three projects – two of which were commercially and critically acclaimed (2012’s Away and Beyond and 2014’s The Ascension.) 2014 saw him adopt the name ‘2Baba’ – no doubt an official change mirroring his legend status.

The YBNL huncho used to be a fierce rapper, putting out street darlings like Eni Duro and Anifowose. However, Olamide has since switched up his style, becoming more singer-like. This has no doubt, lend to his growing influence. The likes of Lil Kesh, Naira Marley and Zlatan owe their success in the street-hop business to Olamide, whose efforts have cut out an in-road for music which stays grounded to its roots. Olamide has also boasted at least two hits every year for the better part of the decade.

At the peak of their powers, the Okoye twins were about the largest artistes in the continent. Selling out stadiums, they rocked the world with their Michael Jackson-inspired aesthetics: flashy outfits, breakdance moves, and a sound which would come to influence artistes almost a decade after their peak. Nowadays, the twins are solo artistes. However, their overall impact in the trajectory of Afro Pop needn’t be questioned. They’ve done legend stuff.

He came into the game with “Dami Duro,” a banging song which proclaimed his familial ties to wealth. Seven years later, two albums in, Davido is, alongside Wizkid, leading Africa’s Afrobeats movement – however, he gets particular praise because his artistic vision is unwavering, and it is African in scope.

The Starboy has been one of Africa’s biggest artistes since his come-up in 2011, circa Holla At Your Boy. Since then, he’s released three projects: the classic Superstar, the experimental Sounds From the Other Side, and Ayo, the eponymously titled album which features songs like Jaiye Jaiye and Ojuelegba. But perhaps, Wizkid’s greatest contribution to the Nigerian music industry in the last ten years has been his international success. He’s famously sold-out the 02 Arena twice, and since “One Dance” with global superstar Drake, he has opened up spaces to African artistes.