Born Michael Collins Ejereh, there’s no producer and music executive in the Nigerian music industry who enjoys the goodwill and longevity that Don Jazzy can boast of. Despite this, he operates under a guarded yet carefree persona that disallows fans from knowing much about him. However in a recent interview with media personality, Ebuka Obi-Uchendu, for Bounce Radio, the don shared largely on his humble beginnings, his foray into music production, working with D’Banj and setting up Mo’Hits, their subsequent split, Mavins academy, and his love life. Here’s a detailed recap of what Don Jazzy revealed in the conversation: 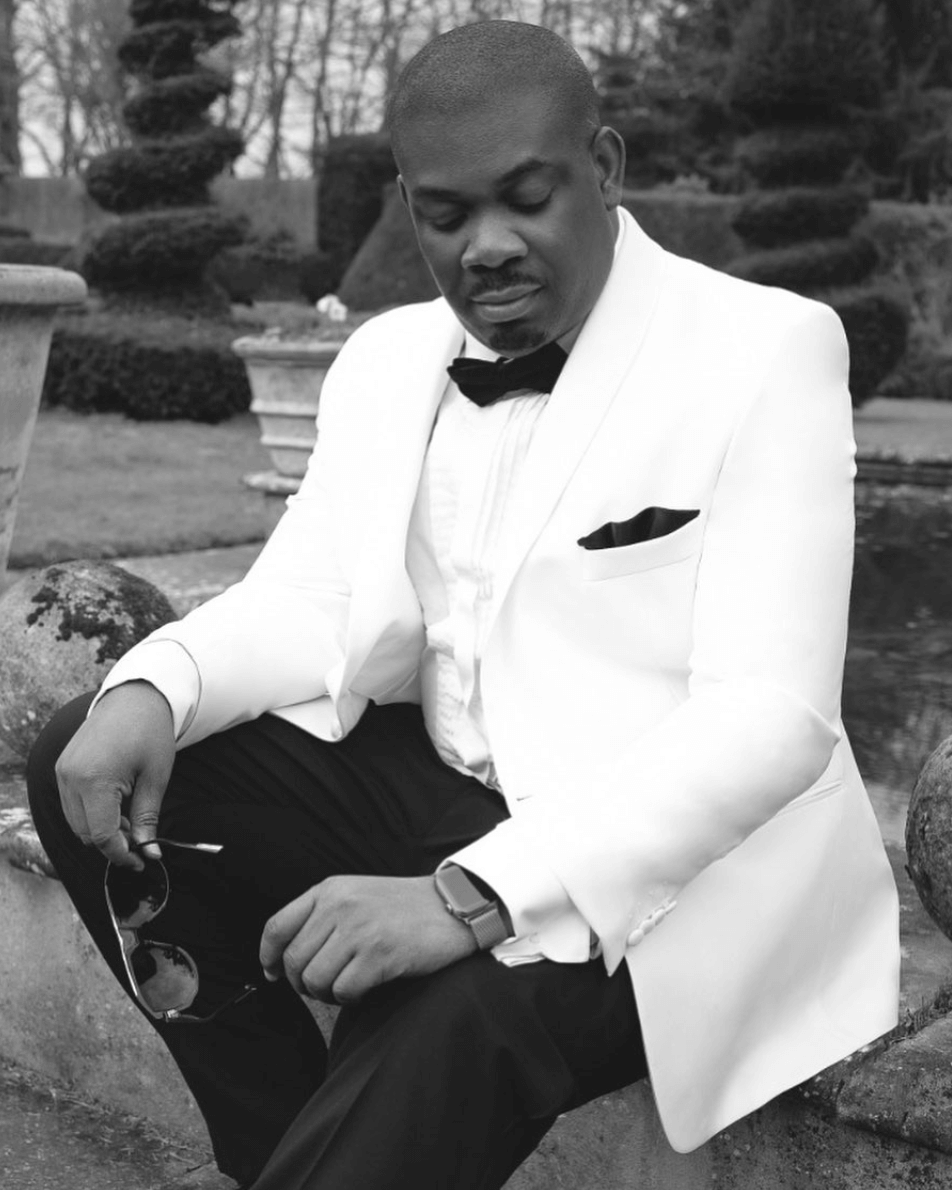 Don Jazzy is from a family of four kids and was raised in the popular lower-class area of Ajegunle where he developed his natural flair for making music in the Cherubim and Seraphim church his family attended and continue to attend, till date, Don Jazzy inclusive.

Don Jazzy’s father is a retired banker who worked as an artiste manager after resigning from bank work and he also farmed sugarcane in their backyard while his mom sold akara in the evenings. According to Don Jazzy, their family continued to worship at their church even when they moved to Egbeda.

ALSO READ: Don Jazzy Opens Up About His Failed Marriage With Michelle Jackson

He also disclosed that he is related to Nigerian dancehall icon, Daddy Showkey, who is a popular personality from Ajegunle.

For primary school, Don Jazzy went to Awodiora Primary School and attended Ijanikin for secondary school. There, he further discovered his love for music and concentrated solely on it to the extent that in SS2, his grades became poor and prior, he had done well in school. Eventually, in SS3, he had to fake the results he presented to his parents but still got a beating as the fake version wasn’t good by much.

Other than the formal aspect and his music escapades, school took a hit on Don Jazzy’s self-image as he revealed that the girls whom he liked never liked him back due to his looks and attributed this experience to being the reason for his shyness and also why he doesn’t do interviews.

He was also best friends with actor OC Ukeje in Ijanikin and together, they were in a music group that did gospel music.

When Don Jazzy turned 17, his uncle took him to London and he soon found himself getting multiple opportunities to work as an instrumentalist as he played at different paid gigs from churches to weddings and so on.

At this stage of his life, he first worked for Jide Chord who then introduced him to Soji Solec for whom he used to make beats of the band's instrumentals on his keyboard. From these shows, he met Kas Beats whom he banded with following the disbandment of the Soji Solec crew. Kas contracted his services as a keyboard producer. After, he met JJC Skillz & 419 Squad through Kas when the latter DJed at a party and played a song Don Jazzy produced for him. With JJC, Don Jazzy then learned how to produce on a computer-- an act he perfected within a week and there, he also met his eventual partner, D’banj.

He made it very clear that he was a talented producer and aware of his skills, letting us in on the fact that whenever he was exposed to an instrument for the first time, he was bound to get the hang of it after tinkling with it for about 20 minutes. Don Jazzy also declared that he was a don where percussion was involved, calling himself the world best while attributing his hit-making skills to his devout C & S upbringing where only frenetic worship beats were played.

After about a year, Don Jazzy left JJC & 419 Squad due to the fact that he was offered a contract that didn’t make him feel duly valued. And for the don, he emphasised how particular he was about only being where he was valued. It was when he left that he and D’banj came to Nigeria as Don Jazzy vowed to make D’banj, who was the catalyst for his love for music production and artiste management, the greatest living young legend-- while bent on proving his worth to JJC. He had offered D’banj a 60-40 deal with him taking 40%, an offer he made so D’banj would not feel cheated but D’banj had insisted on equal payout and this had made Don Jazzy trust him.

Apart from doing music in London, Don Jazzy also worked as a security guard, a burger flipper in McDonald’s and as a commodity packer.

When the duo came to Nigeria, D’banj soon dropped his debut album, No Long Thing, it had been made within two weeks. The album birthed D’banj’s breakout hit, Tongolo and soon Mo’Hits began to be formed with the signing of Kayswitch, D’Prince, Dr Sid, Wande Coal and eventually, Ikechukwu. The first two were siblings of D’banj and Don Jazzy respectively while Dr Sid was a friend and Wande Coal had been discovered from a group of singers who also danced.

Ironically, after Tongolo, Don Jazzy had confessed that he and D’banj had tried to sell Mo’Hits to Obi Asika, who was the owner of Storm Records, for N1m. The deal was going to be a merger but Don Jazzy had lost interest due to the slow pace of things and shortly afterwards, D’banj had gotten an endorsement deal worth 20 million Naira.

Don Jazzy in this era, was largely in the shadows and cut a strongly enigmatic persona where he used a walking stick and was whispered to, well he shared that he got the idea to present his brand in such a manner by a certain DJ Tee who shot the music video of Tongolo.

GOOD Music deal, end of Mo'Hits and beginning of Mavin

Don Jazzy shared on the dissolution of Mo'Hits in 2012 and cited D'banj's choice to make good on their GOOD Music deal after his meeting with Kanye West. According to Don Jazzy, he was positive that afrobeats wasn't ripe for global domination and moving to the US would have affected the growth of other Mo'Hits acts as well as their reach in Nigeria.

Don Jazzy shared that his eye-opener was the extent to which his production work on Kanye West's Lift Off had been stripped off. He then made it known that he had a 5-year production contract with GOOD Music, but had failed to pick their calls till the period elapsed.

He also mentioned that prior to the GOOD Music deal, the relationship between him and D'banj had suffered several strains and they were more or less not talking. The shoe finally dropped after the deal when Don Jazzy made it known to D'banj that he wanted out of the partnership.

He also spoke on Wande Coal's exit where they had a disagreement over a song Wande Coal released which Don Jazzy had said was done without giving him his due credit and behind his back.

According to Don Jazzy, after Coal's exit, he appealed unsuccessfully to him several times to come onboard the Mavin ship.

Don Jazzy however made it clear that he D'banj and Wande Coal are now back on good terms and mentioned that he and D'banj have worked on records together but are yet to find the classic hit material that their collaborations were known to birth and as a result are yet to release anything.

Speaking about Mavins, he admitted that for the new label, he realised he had to take the front seat and ditch the don persona he operated with while in Mo'Hits. He also had to take a backseat on producing due to the fact that fans may not have fully received any songs he produced for other musicians that were not Mo'Hits acts. He also included a clause in his artistes' contract whereby they were free to walk away once they felt dissatisfied or tired of their alignment with the don.

He addressed the infamous Headies award saga of 2016 where he clashed with Olamide. For him, as a fellow music executive, he fully understood Olamide's grouse and wished he hadn't responded the way he did. He shared that he made peace with Olamide the next day.

Speaking on Mavin, Don Jazzy made it known that he believes in all his artistes equally and does not interfere with their music-making process but rather gives them a free rein. He copiously shared that he was skeptical about Rema's Bounce and only released it after persuasion from Rema himself.

Not one to mince words despite being shy, he touched on his influencer status given his obvious love for skits, TikToks and funny personal videos and linked it to the fact that he was blessed with grace and goodwill from which his acts tended to benefit from. As a result, he'd decided to turn this goodwill into additional value by helping his musicians in any social capacity he could.

In a rather shocking revelation, he shared that he regretted not having signed Simi, Teni and Falz when he'd had access to do that.

He also spoke about the Mavin Academy where he has 16 fresh new artistes learning the music game while earning money. Arya Starr was a student at the academy before she became activated and he spoke excitedly about the star prospects he saw in the singer, stating that she reminded him of himself.

At the end of the interview, a pet peeve of Don Jazzy was revealed when he called out Ebuka for not following him on Instagram and soon went off on the importance of every social media savvy Nigerian who enjoyed the music being churned out by Nigerian musicians to follow Wizkid, Burna Boy and Davido.