Fan Affairs with Blaqbonez: "My First Soldout Show Showed Me It Wasn't Just the Internet"

ALSO READ:  Fan Affairs with Tomi Thomas: "I kissed My Fan Back"

In this edition of Fan Affairs, we speak to the Sex Over Love campaigner and creator, Blaqbonez, who is a Nigerian music fan-favourite, to get the squeeze on how his fans have been showing him love. 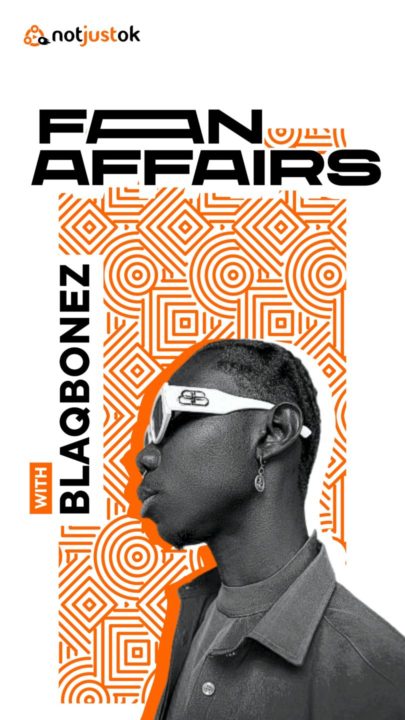 This was after my first soldout show and seeing people come out for me like that just made me realise it wasn't just the internet because people used to always talk about how “They only like you on the internet, there are no real fans that'll come out to your shows.” That was when I knew.

ALSO READ: Get into Blaqbonez’s Sex Over Love with These 7 Songs | Album Review

My show was sold out, everybody singing my song word for word. It was amazing.

Omo, I try to not let anything affect my day-to-day life, the things that I love doing, I still do them. I don't care if I'm popular, I still do what I want to do and eat where I want to eat.

Fan Affairs with Blaqbonez: What is the craziest or most memorable thing a fan has ever done to get your attention?

There was this time that a producer was going to my label office just hoping that he would see me randomly and play me some beats. That was crazy because what are the chances he'd have seen me on the particular days he came?

This was sometime last year, I listened to his beats and we connected.

Probably Wizkid or Drake. Those two guys are my biggest inspirations so if I see either one it's going to be crazy.

If you enjoyed Fan Affairs with Blaqbonez, make sure to check Notjustok.com every Tuesday, as we'll be sure to bring you more authentic stories from all your favorite music stars. You can also stream Blaqbonez's Sex Over Love album here.