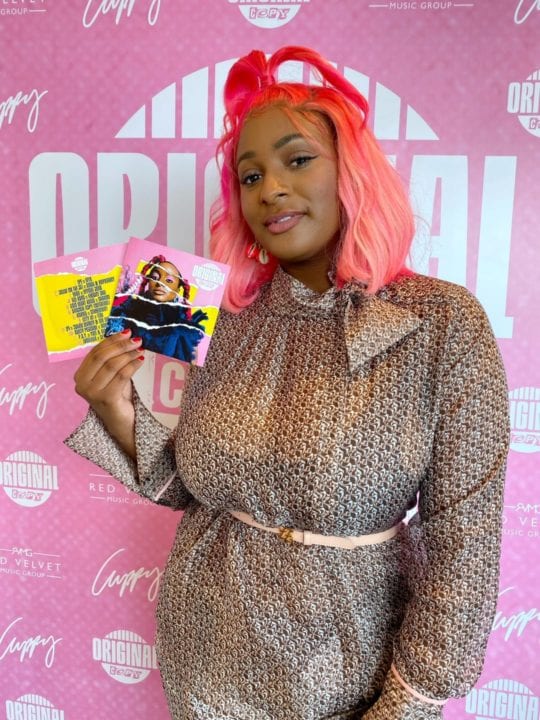 Cuppy has shared her debut album 'Original Copy.' We review the tape.

“54” isn't the best song on Original Copy but the most telling. Julian Marley, the international Reggae superstar and Sir Shina Peters, Nigerian Juju maestro, might on paper, seem an unusual combination but Cuppy pulls it off –as does the entire tape.

An ode to the continent of Africa, its title is cognizant of our fifty-four nations, the kind of record to soundtrack an outdoor party while paying political and social homage. Cuppy acts as a bridge between the first verse of the song, handled by Julian and the second, by Sir Shina Peters, whose Juju sound leads the record into transcendence. It's one of the wonders of a debut album which will awe most listeners, prompting discussions how Cuppy evolved as a singer.

Was she as bad as they said though? Admittedly, not many were sold on her artistry when she made her bow as an artist some few years ago. The dynamics of class come into play, as her famous father was often the fodder for insults –the veiled and the not so veiled– aimed at her continued ascent to pop reverence despite her questionable records. Without the Otedola money, they said, Cuppy was a rather average artist and would fizzle out of mainstream consciousness sooner than later.

Outside of continued digs, Cuppy continued to make music and in the past months have emerged as a key player in Afrobeats' global rise, especially with her work at Apple Music on Africa Now. Original Copy follows House of Cuppy, a compilation tape put out years ago where she made EDM remixes of her favorite Afro Pop songs. Original Copy finds Cuppy at a graceful stage of musical growth, beholden in the way she threads her narrative in between the contribution of her features, in many cases outperforming them but more fittingly, being a worthy sparring partner for their famed musical talents.

Other times, knowing when to let others the shine is imperative for a song's potential. On “Jollof on the Jet” she pairs the protean Rema and Rayvanny of Tanzania's bongo flava tradition, both delivering scintillating verses while Cuppy takes a backseat, supplying cheeky lines on the hook. Fireboy DML relays his melodic Afro Life sound on “Feel Good,” flaunting excitable songwriting over the sunny production. He carries the song but Cuppy is there, still, with backup vocals. UK rapper Ms. Banks plays alongside YCEE for “P.O.Y., a rap affair relaxed in its passage of romance and braggadocio. Cuppy lets the record move, both rappers delivering eccentric verses in turns.

With Cuppy on singing duties the songs take on the livelier hue. “Litty Lit” is a stunning collaboration with the effervescent Teni, bringing the Billionaire singer the expertise of Pheelz to work with. The production is Fuji inspired, party ready drums and melodies in supply. Cuppy turns up for the chorus, cheerily singing: “ah, ayoyoyo, make we just dey faaji go/ no stress and no sorrow...”

As with any Pop album of today, the love records form a dominant part of Cuppy's debut. With a preference for male vocalists (clearly an attempt at balance) she crafts memorable songs, in every occasion in perfect sync with her feature. The legendary Wyclef Jean comes into “Wale” as hungry as a debutant, with an impressive lyrical performance playing the lover. Cuppy's willowy voice softens the atmosphere and tugs at replay value. Her output hints nostalgia and the Haitian artist furthers the idea, what with this record sounding like a 2000s R&B duet. “I see the look in your eyes; what you gon do with it?” asks Cuppy on the electronic charged “Cold Heart Killer” with Darkoo who holds her own. Stonebwoy turns up with his signature Dancehall lover vibes on the bouncy “Karma.” Nonso Amadi, on “Guilty Pleasure,” the chilling vocal output he's known for present even as Cuppy takes verse, hook and chorus.

On a recent interview Cuppy explained that Original Copy wasn't the typical DJ tape. She had her vision and the featured artists were selected to match that vision. The absence of a traditional “hit record” (only “Jollof on the Jet” comes close to one) shows artistic deliberation for which she's now getting her due flowers. On “Original Copy (Interlude)” she takes a poetic dig at early detractors, then going on the exciting six-track which runs down the project. They are shots well earned. Cuppy did something with her debut album, decking the tape with fresh electronic patterns, pairing exciting musicians with notable producers.

While this is all good, the biggest flex comes with the simple act of renaming herself. If you didn't notice, the pink haired act drops the “DJ” prefix for this album, a political and personal choice which reflects growth and ambition. More than an Otedola with the money, she's also Cuppy with the great music. And she's here to take over, already recognized by myself as the creator of one of 2020's best albums.