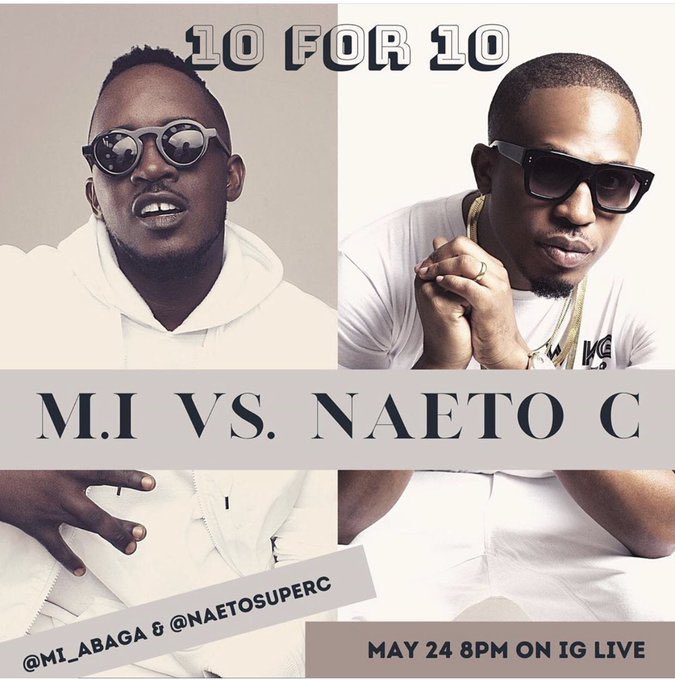 There's a sense of fluidity when rappers speak. This isn't bias. You heard it when Vector and Ladipoe discussed, a Mind to Mind session in which, for the first time, Vector laid down the ideas he had in mind for his forthcoming project, an infusion of local rhythm into rap... rapfrobeat, a coined term. Tonight's speakers were M.I Abaga and Naeto C, two rappers who've talked their shit and earned the tag of greats.

Prior to tonight, they'd been some stoking of fires. Some people thought Naeto C no match for Abaga. Their folly was corrected a few songs into this. Naeto C, the only MC with an MSc, could damn well go against the rapper in Nigerian history, were hits the topic. MI, as the crowd knows, boasts enough hits to take down 50 Cent.

It was a well-matched event, and this evening, for various cultural reasons, it couldn't be missed. We'd done our 10vs10; however, these acts are so huge they have an entirely different experience for us, and the work of our brilliant team excellently complements theirs.

At the end of this review, I'll prove one thing:

1. This evening is a moment we'll live to savor forever.

That said, to the business.

M.I kicked things off with "Teaser," off his classic Talk About It debut, the General Pype–assisted record casting a chill hang-out mood; Naeto C's kickback, the great jam of massive proportions, "Tony Montana," eased our hearts even better. A fine start, a tipped hat to their calmness, the gentleman in these men weren't going for the bars. They were easing us in, gently, gently.

The mood well continued into Super C's "Duro," and M.I would usher in the grand "Bullion Van," a record that had the comments explode. It was yet well-paced, and in-between these records, were the backstories, the camaraderie between both veterans. In the background, the din of Naeto's kids playing could be heard. On-screen, smiles, and head bumps, as timeless record after timeless record, played.

Legacy, as we know, is part of why a majority of people pick up the mic. Especially rappers, whose very competitive nature ensures they strive for perfection each time they spit some bars. They own the moment, as Kendrick Lamar showed us on "Control," as M.I did on "Safe," bending songs to create The Song. When M played "Safe," there was palpable tension in the air. What was Naeto playing? "Ako Mi Ti Poju," featuring the late great DaGrin came on and well... That was a contest. Take DaGrin's street-earned grit, and pair with Naeto's bossy flows, over a beat which imposed its greatness through its maximalist instrumentation, the vocoder chant of the song's title.

When a battle begins like this, you know you're onto something. Over the course of an hour, songs like "Overkillin," "Back When," [a particularly interesting match-up], "Anoti," "5 and 6," and a whole lot of other classics, justifying the anticipation that trailed this event.

At this point, let's leave the hits: The network was largely good, much to the delight of the near 10k viewers.

As you've seen, poor internet has led to the sourness of most of these beautiful events. If that wasn't the case, communication between both battlers tilts way towards informal, dampening the excitement and efficiency proper structure would have ensured.

M.I and Naeto C, obviously know how to make conversation, and that skill shines through. Perfect diction, clarity of their speech, and the light jokes in between was a great part of this event.

Of course, all of us!

But with the ticks in the comment sections, we saw the celebrities (mostly artists) who joined in, every step of the way cheering the great moment on. From Ice Prince dubbing Naeto C "the King of Swag" to Yung 6ix dropping a cheeky comment about M.I, the comments section was alight with lots of popular names. DJ Jimmy Jatt, Prettyboy D-O, Adekunle Gold, Toke Makinwa, Falz, etc.

You could literally feel the excitement, as nostalgia placed us in the era of parties and kaftans, complete with the hat. You rapped along to the M verse on "Undisputed," and you felt like the excitement of your first listen, or something close to that.

Now, To The Talk: Influence

Ajebutter 22, prior to tonight's event, had hailed both M.I and Naeto C as big influences. Of course, with a couple of momentous albums and hit songs to his name, Ajebutter has proved his mettle as a commercially-viable rapper, tapping from a blueprint demonstrated by M.I and Naeto C throughout their careers. Falz has, too.

On the night, one of the greatest moments (low key) was Ajebutter hearing a song and expressing the urge to get into a studio. The. Music. Moved. Him.

M.I asserted a fact we've always known: That no other rapper has impacted popular culture as much as Naeto C. The suave C: You're a real humble guy, he said to M.I, and mentioned his recent run-ins with some people (they didn't understand him), taking the hip hop path by saying a lot of young rappers feel entitled, and M, having worked hard for whatever he has, owes them nothing beyond what he chooses to offer.

Remember when "too blessed to be stressed" was everyone's caption? Naeto C influenced a generation, fam.

This @MI_Abaga vs @NaetoC has made me smile so much . So many wonderful memories . Well done gentlemen ??

Elsewhere, many of my writer friends provided minute-to-minute reports on Twitter, capturing the impact of the records in a way these words would never. Back to the screen: M.I and Naeto C, two rappers who impacted an era, one largely considered Hip Hop's golden era in Nigeria.

Alas, for all the premier content we got from both legends, the playing kids of Super C were the unspoken heroes. We've all had our why-can't-they-shush? moments with the little ones, but tonight, they prompted the most memorable line when Naeto C told them that's Daddy's making history.

And that's all facts... No Cap, even Naeto C must say so himself.