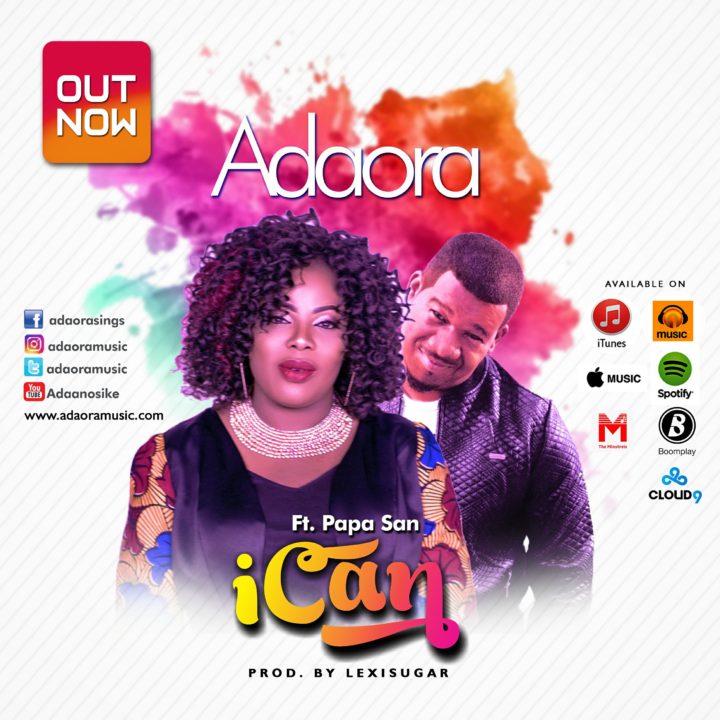 US based Nigerian American female singer ‘Adaora’ has released the lyrical video of her inspirational single, ‘i CAN’, featuring World renowned Reggae maestro PAPA SAN,

With the new single, "I CAN", the inspirational singer’s intention is for everyone to start the year on a positive note with this new single featuring the veteran Reggae Dancehall king who has released albums which has topped billboard reggae charts, won 12 marlin awards, Stellar/World Music Awards including nomination for a Dove Award.
He has also been previously featured by Lecrae, Israel Houghton, Fred Hammond and many music greats.

"I Can" is the latest effort by renowned singer, Adaora. Her other previously released hit singles include "Papa", "I Come" and the most recent single over the yuletide holidays titled "Last Christmas".

Her new single, “I CAN” produced by Lexisuger, reminds us to stay positive this year because WE CAN! accomplish what we set our minds to.

Speaking about the song, Adaora shares some more encouragement and insight - "A special word to my Nigerians family especially, that despite all the chaos, deflected zeal or disappointments due to the elections, I want to encourage you all with this song that WE CAN do all things regardless of our political affiliations because God has a plan for everyone.

As you head to that interview, labor ward, business meeting, exam, promotion cycle, polling booth, remember you CAN do it! because God has made all resources available to you!"

WATCH "I CAN" LYRIC VIDEO BELOW