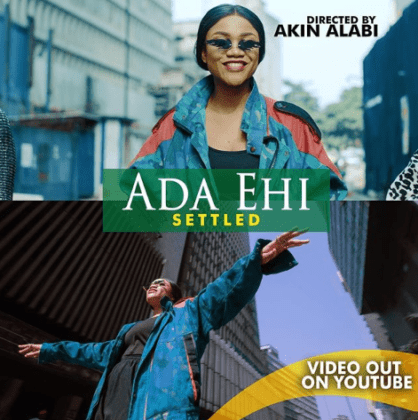 Award winning Nigerian Gospel Artist, Ada Ehi has released the captivating video for her hit single, "Settled".
The song was produced by Masterkraft and the video was directed by Akin Alabi with cameo appearances by Agent Snypa and Teni of style territory.

Watch the Video of "Settled" by Ada Ehi


MORE ABOUT ADA EHI
Ada Ehi is a Nigerian born international gospel singer-songwriter, recording and performing artist known for releasing some of Africa’s biggest gospel music content, known all over the world today. Her song, ‘Only You’ was recently named by PulseNG, as the 20th biggest song of the past decade – next to Sinach’s Way Maker and I Know Who I Am, and Yemi Alade’s Johnny who were the only other female singers from Nigeria to make the list.

Being listed as one of Nigeria’s most influential Christians, she’d been singing since age 10 where she was backing up fellow child star, Tosin Jegede in a music group. Shortly after, she joined Pastor Chris’ Loveworld, where she was nurtured along with Sinach, Eben, JoePraize and many more. She quickly found her sound, and is distinctively known for songs across different genre but with the unmistakeable richness and high pitch of her unique voice, and sweet ballads.

Currently with over 500k subscribers and growing rapidly, Ada Ehi delivers some of the finest music videos you’d find from Africa, flavoured with beautiful and scenic views, distinctive and adventurous fashion, finely blended with faith stirring music as she sings faith and strength in God in today’s world.