Tyson Fury has given the hint that he might not be returning to the boxing ring. He confirmed this in an interview after knocking out Deontay Wilder on Sunday, October 10th, 2021 in Las Vegas. 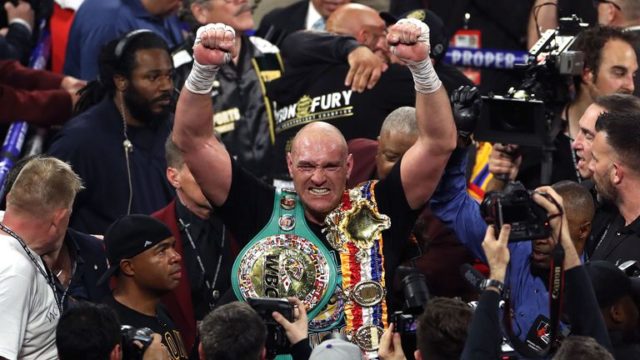 The Gypsy King was speaking in an interview with the Telegraph said he does not know how many fights he has left in him.

He also confirmed that he had one more fight left in his contract, but he can not give any assurances as it concerns the next time he will be on the ring.

I don’t know what’s going to happen. I’ve got one fight left on my contract with Top Rank and ESPN and we will see what that is. But I’m not thinking about boxing right now. I don’t know how many fights I’ve got left. I don’t know if I need to fight anymore. I don’t know what the future holds. It’s not money or a million title defences.

I am motivated to get up in the morning, do a little of training, and enjoy my day. I don’t have any goals in boxing. I have done everything, the only one to do it in my era. I will always have the WBC, WBA, WBO, IBF, Ring magazine champion, that will not evaporate in history, but once it is done, it is done and you cannot get it back.

Once you are done, it doesn’t matter how many belts you have, who you beat, what your record is. You are just another bare bum in the shower and I always had that opinion.

You have to enjoy it while it is here because when it is gone. Even the wins and the glory die down and sooner or later you just become another person and a has-been.

Tyson Fury has a list of people that he might be fighting if he decides to get back into the fight. Dillian Whyte is Fury’s mandatory challenger, but the Brit’s promoter, Eddie Hearn is keen for him to finally get his first world title shot.