Tyson Fury & Deontay Wilder Vow to Knock Each Other Out.

Tyson Fury and Deontay Wilder have vowed to knock each other out in their trilogy heavyweight fight in Las Vegas on Saturday, October 9th, 2021. Wilder has emerged winner in their last two fights, and the Brit believes this fight will not be an exception. 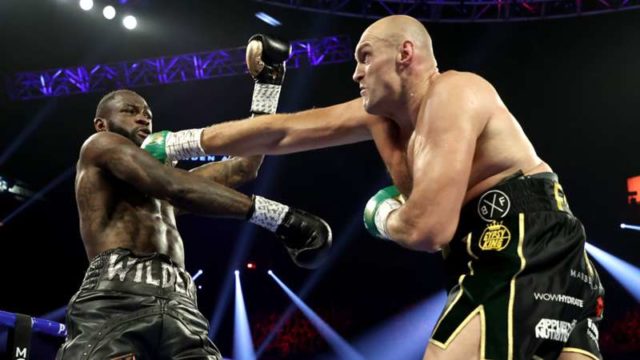 READ ALSO: It feels like I am playing for a different club – Jota

Both fighters made these promises in the face-off at the T-Mobile Arena, the venue for the fight. Fury has promised to give a repeat of their fight in February 2020, according to reports from Sky Sports News.

The Brit knocked out the American in the seventh round, stopping Wilder from claiming the WBC title.

Fury believes the fight will be interesting, and he expects a top-notch performance from his opponent, but he believes Wilder will not match his ability on Saturday.

It’s going to be exciting. Wilder is a dynamite puncher and as we’ve seen over the last few months, we’ve seen the heavyweight landscape change so much. But I’m still in form, doing what I’ve got to do. I’m going to knock him spark out on Saturday night and I cannot wait to get him in that ring and give him a good hiding, for sure.

Wilder also spoke about the fight, said he is feeling great and ready to face Fury.

I feel great; I feel amazing. I’m rejuvenated, reinvented, and I’m ready to go. Saturday night is going to be a special night. I think the fans are in for a treat, as they always are when the Bronze Bomber steps in the ring. I see me beating him up and knocking him out. There are many things that I visualised in the first fight, along with the second, and I didn’t execute the game-plan. But this time around, it’s just a different feeling. All the way around. The atmosphere. The energy as a whole.

I’m looking forward to putting a great performance, come October 9, and those that are going to be in the arena are going to feel the electricity that’s in there.

The winner of the fight will face either Usyk Oleksandr or Anthony Joshua.

Manchester United Announce Its Player of the Month for September 2022