The Chinese League has been evolving in recent years. The organizers have invested a lot of money into the clubs which have attracted a lot of players around the world.

Here is a list of the top ten highest-paid players in the Chinese Super League, according to The Daily Star. 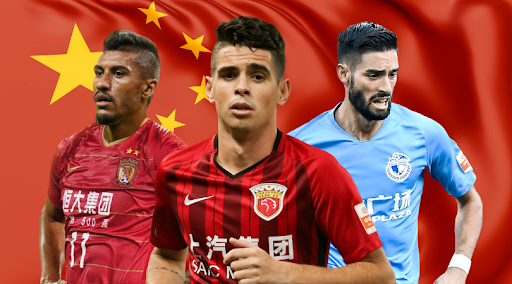 The former Everton player completed his move from Manchester United in 2019 to Shandong Luneng for an undisclosed fee. He earns £10.5 million per annum.

Eder decided to leave Inter Milan in the summer of 2018 for a fee of around £5.5 million. He scored 32 goals in 60 games for the club during his two-year spell at the club. He left for Sao Paulo in Brazil in March 2021.

The Brazil International Paulinho joined the club from Premier League side Tottenham for £9.9 million in 2015. He spent two years at the club before moving to Barcelona. He rejoined the club in 2018, where he signed a three years deal.

The former AC Milan winger was one of the biggest names to join the club, he signed a three-year deal for the club for a reported fee of £16 million, his time at the club was unsuccessful scoring only four goals, so he had to join AS Roma in January 2021.

The Italian forward was one of the highest-paid players in the world of football when he completed his move to Shandong Luneng in 2016 for a fee said to be around £13 million. He scored 66 goals in his 133 appearances at the club.

He completed a switch to the Chinese club for a fee of around £65 million from Villareal in February 2018. He scored 53 goals in 74 games for the club.

The Brazilian left Chelsea in January 2017 to the Chinese club for a fee of around £60 million. He has settled well in the club, scoring 44 goals in 144 games.

The former Manchester City player transfer to the club made him the highest-paid footballer in the world, but it was an unsuccessful time for the player at the club where he spent just seven months.

The Argentine remains the highest-paid player in the history of the Chinese Super League. He earned 798,000 in the three years he spent at the club.