Nigerian track and field athlete Chukwuebuka Enekwechi has qualified for the men's shot put final at the ongoing Tokyo 2020 Olympics. 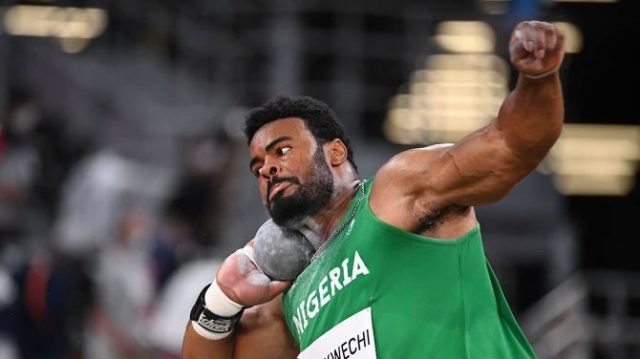 Nigerian track and field athlete Chukwuebuka Enekwechi has qualified for the men's shot put final at the ongoing Tokyo 2020 Olympics.

Enekwechi booked a place in the men’s shot put final after his launch hit a mark of 21.16m. Contesting in Group B, he ranked 4th and picked up one of the non-automatic qualifying spots for the final.

The 28-year old is the reigning African champion in shot put in 2018 and is also a Commonwealth Games Silver medalist. He is also the 2019 African Games champion and the reigning Nigerian National Sports Festival champion.

Following his triumph, he will contest against 11 other opponents in the final, which will take place on Thursday, 5th August 2021.

The Nigeria team so far has won two medals in the Olympics. All thanks to Ese Brume, who won bronze in the long women’s long jump, and Blessing Oborodudu, who won silver in the women’s 68kg wrestling.