Thiago Alcantara Ruled out of Liverpool’s Next Game

Liverpool Football Club has been hit with injuries to key players in the past weeks. The Reds will be without Thiago Alcantara in the next two games. 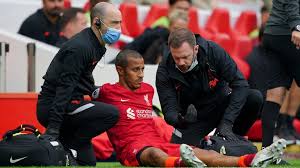 READ ALSO: I SUBSTITUTED MESSI FOR THE GOOD OF THE TEAM – POCHETTINO

Sky Sports reported on Monday, September 20th, 2021 that the player will miss the Red’s games against Norwich and Brentford on Tuesday and Saturday, respectively. Liverpool assistant manager, Pepijn Lijnders, confirmed this during the team’s press conference ahead of the game against Norwich.

He said Thiago suffered a calf injury in the game against Crystal Palace over the weekend. The player will have to undergo a further scan before the extent of the damage can be ascertained.

I can’t say now how long it will take, but not tomorrow (Tuesday) and not the weekend. Let’s get the scan results back and we have a proper diagnosis. It’s a shame as well because he was taking the game by the hand against Palace, he was a proper playmaker in my opinion.

Alexander-Arnold and Andrew Robertson both miss the game against Crystal Palace. Meanwhile, Bobby Firmino has been absent for the Reds in the last three matches because of a hamstring injury.