Barcelona's legend, Lionel Messi, had his farewell press conference at Camp Nou. This is the first time the Argentine will speak after Barcelona did not renew his contract because of the Financial Fair Play Rule in Spain. The Argentine addressed the Press at the Camp Nou on Sunday, August 8th, 2021. 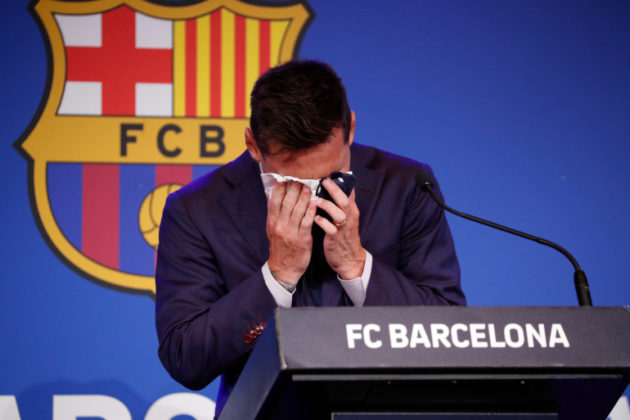 It was an emotional speech for Messi, as he was all teary. This might be the last time Messi is going to be speaking in Barcelona. He expressed how difficult it was for him to leave the club.

The Argentine appreciated the club, the fans, his teammates who have helped to achieve all he won at Barcelona. He also said he never imagined he will say goodbye in a press conference, he has always wanted it in a football game with fans in the stadium.

These recent days, i have been thinking giving a lot of thoughts to what i can say and the truth is that, i can't think of anything. This is really difficult for me after so many years been here my entire life.

I am not ready for this and honestly last year with all the nonsense with the board; I was convinced that i knew what i wanted to say, but this year is not the same. This year my family and I were convinced to stay here, that we were to stay at home, that's all we wanted more than anything. We already made this our home, and we thought we will be staying here in Barcelona.

The time we have had here in this city has been amazing. Today I have to sway goodbye to all of this. i have been here so many years my entire life since I was 13. After 21 years, I'm leaving with my wife, my three little Catalan Argentine kids and I can't say that in a few years we won't come back because this is our home, and I promised my children that.

I am just really grateful to my teammates, my former teammates, everything at the club, everyone who has been by my side and all the people. There are so many people, even though there are some people I only met a few times.

I have so much respect to this house, for the luck that I have had to live some many experiences, so many beautiful things have happened, also some bad things. All of this helped me to grow and improve and made me the person I'm today.

All of that said, i gave everything thing for this club and this shirt started from the first day i arrived until the very last. And the truth is that I'm leaving. I'm so grateful for the care that people have shown me. I would have loved to go in a different way, I never imagined how to say goodbye, not because i never thought of it, but i never imagined it this way. Especially i imagined it with people in the pitch.

The last year, we have not been allowed to play with public because of the pandemic and it's been difficult not to hear their noise, cheers and not to have them nearby, not to hear them shouting my name and i leave this club now without seeing the fans for over a year and a half. If I had imagined it, I would have imagined the Camp Nou full been close to people and been able to say goodbye properly but it has to be this way and I want to say again that I am so grateful for the love everyone showed me during these years because I have had some great moments here as well as some bad ones but the love people have showed me has always been the same.

I recognize the love that I have for them and the club as well and I hope that I could come back and be part of this club in any way and bring something to help this club been the best in the world. Honestly, I'm figuring so many things that I want to say but that's all I can say right now.

I have thought about it a lot, but the words won't come to me. Thank you to everyone.

Messi holds the highest number of goals scored by any player in La Liga, and most hat tricks in the league.

Messi has not decided which football club he will play for next season, but he is expected to complete the agreement with Paris St. Germain after he had positive verbal talks. The contract is expected to run until June 2023 plus the option until 2024.

This is the word of Leo #Messi: pic.twitter.com/k0btQ7k1py