Chelsea Football Club has joined the race to sign Lionel Messi. The news was confirmed on Friday, August 6th, 2021, on Diario AS' website, a reputable sports newspaper in Spain that is football-centric. 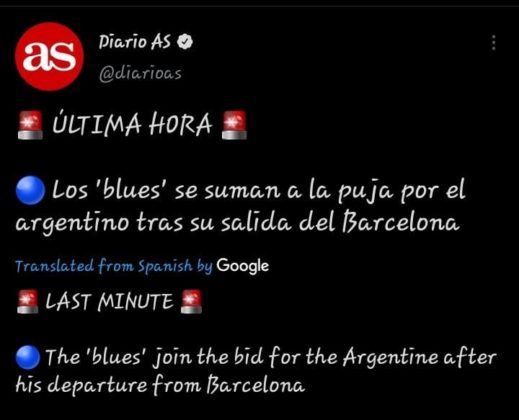 The Blues has been focused on signing Romelu Lukaku from Inter Milan to help boost the team's attacking prowess going into the 2021/22 season, but Chelsea's board is also trying to see if they can get to sign Messi following the current transfer situation of the Argentine. The blues are planning to meet with representatives of the 34-year-old midfielder in the coming days, to discuss the chances of Messi playing for Chelsea.

Manchester City and PSG have been on the radar of Messi since last season but could not pay the asking price of Barcelona on the club's legend, which is reportedly way above five hundred pounds.

Barcelona announced on Thursday, August 6th, 2021, that Messi's contract would not be renewed because of the Financial Fair play rule. The midfielder is currently a free agent; he is currently looking at offers from different clubs, but PSG are favorites to sign him.