Cameroon’s football legend, Samuel Eto’o has announced that he will be running for the post of President of the Cameroonian Football Federation( Fecafoot). Eto’o will hope he gets enough votes that will get his into office when its time for election. 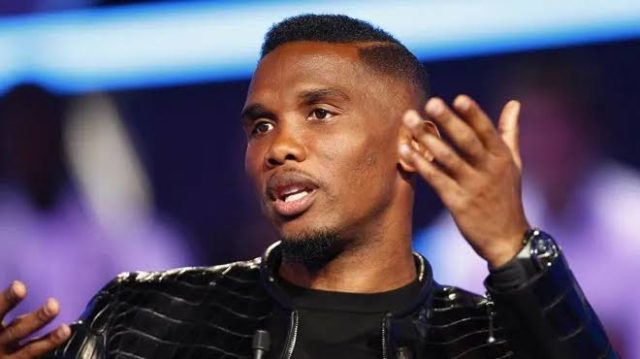 READ ALSO: MARCUS RASHFORD TO BE INCLUDED AS A COURSE IN SCHOOLS

The 40-year-old announced this decision on his official Instagram account on Wednesday, September 22nd, 2021. He said his decision was based on the love he has for his nation.

Eto’o has also been influential not just for Cameroon on the African continent but has recorded success at Barcelona, Inter Milan, Anzhi Makhachkala, Chelsea, and also Everton.

I am honoured and pleased to announce my candidacy for the Presidency of the Cameroon Football Federation. After careful considerations, I have decided to take this initiative out of love for Cameroon and passion for our football. To me, it would be an honour to be at the service of establishment that has bestowed upon me all the accolades I’ve received so far. I stand before you on this occasion because time is of the essence. Waiting is not an option. It is time to rebuild our football. We can no longer delay the revamping of our number one sport because the rest of the world is moving on; it is progressing without us. In a few months, our country will host the African Cup of Nations.

In addition to welcoming players and supporters from sister African countries, as well as journalist and tourists from all over the world. It will equally be an opportunity to present to the world the incredible pool of talent that our country has always been, and the strength of our football community.

We must live up to the huge efforts invested by President Paul Biya and the entire government to provide our country with infrastructures worthy of our prestigious history. 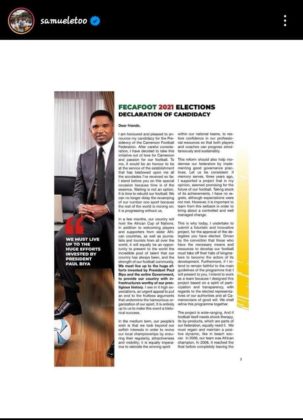 He won gold for Cameroon at the Sydney 2000 Olympic Games, two Africa Cup of Nations titles in 2000 and 2002, representing his country at four FIFA World Cups. Eto’o is also the only person aside from Yaya Toure that has won the African Player of the Year award four times.