Manchester United midfielder, Marcus Rashford, has spoken about what he went through because of the racial abuse he suffered online after the Euro 2020 final against Italy. 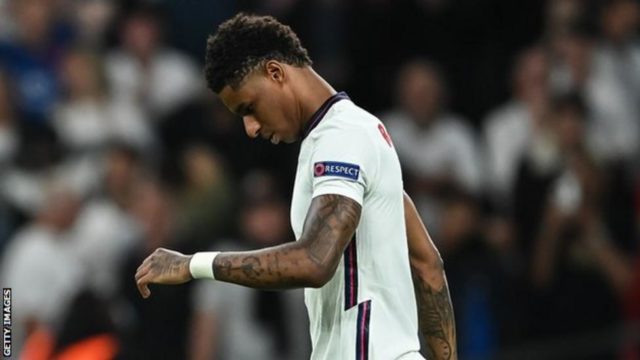 Rashford was speaking in an interview with the BBC on Monday, October 11th, 2021. He said it was nice to see the support he got from different people around the world during that period.

The English man was subject to abuse alongside Arsenal’s Bukayo Saka and Manchester United’s Jadon Sancho. The trio missed their penalties in the final match.

That was nice. It’s something you won’t ever forget. It’s hard to describe the feeling it gives you, but one thing I’ve always said is that I want to see people act as one kn communities and environments and that was one big highlight for me. It was a time everyone came together and whatever they thought was the right thing to do, they just did it and it was a special moment.

The 24-year-old also spoke about how he dealt with missing the penalty, which did not allow his team with the Euros.

This might sound crazy, but being in the moment and not winning the tournament that you’ve been there for two months trying to win and just missing it by one goal, you are fully focused on that. So, in the aftermath, you are not quite tuned into it because you are still thinking about the game. For me, that was certainly the case. It took a week, two weeks to clear my head and not only then did I start taking note of the different people who’ve stepped up and started defending us and spreading the word that racism is not Ok.

The game ended 1-1 after extra time but the Italians won 3-2 on penalties.