Liverpool's assistant manager, Pepijn Lijnders, has given an injury update as it concerns James Milner, Naby Keita, and Fabinho. The gaffer was speaking in a press conference ahead of the club's Carabao Cup game against Preston North on Wednesday, October 27th, 2021. 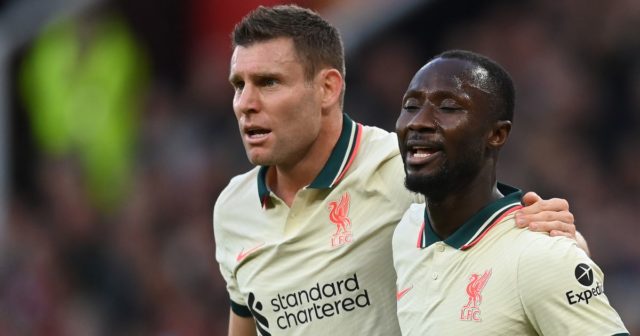 Pepijn was speaking to Liverpool's website in a pre-match press statement standing in for Jurgen Klopp. Keita and Milner were part of the injury casualty in the Premier League game against Manchester United at Old Trafford on Sunday, October 24th, 2021.

Mille felt something, he felt something wasn't right in his hamstring, a little bit right. Then Mason Greenwood made his run and he decides I need to catch him. Millie is always putting the team first. And he created a bigger injury at that moment, that run. The injury will be until the international break for sure, so it's a long one. But we will need him in the coming period.

He also gave an update on Keita and Fabinho's injury, the Guinean was substituted out of thr game after he suffered a two-foot challenge from Paul Pogba which led to the sending off of the French midfielder.

Naby has a bruise at this moment, we assess it day by day. It's looking good, so that's good. Fabinho will not be ready for tomorrow's game, we will assess him day by day still. He can make the game on Saturday hopefully.

The Reds play Brighton next in the Premier League before hosting Atletico Madrid in the UEFA Champions League next week.