Chelsea’s midfielder, Jorginho, has been named UEFA Men’s Player of the Year for the 2020/21 season. The Italian beat Manchester City midfielder Kevin De Bruyne and his Chelsea teammate N’Golo Kante. They announced the award during the 2020/21 UEFA Champions League group stage draw in Istanbul, Turkey. 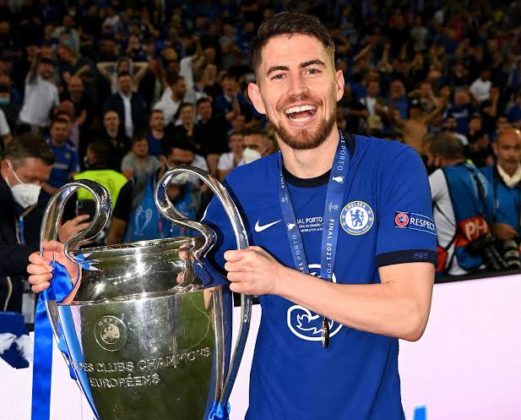 READ ALSO: THOMAS TUCHEL WINS UEFA COACH OF THE YEAR AWARD
The Italian midfielder won the UEFA Champions League with Chelsea and won the European Championship with Italy. He was also Chelsea’s highest goal scorer in the 2020/21 Premier League season.
Meanwhile, Edouard Mendy of Chelsea emerged as the best goalkeeper Champions League of the season after recording nine clean sheets in 12 matches. Rúben Dias of Manchester City won the award for best defender of the UCL season.
Erling Haaland of Borussia Dortmund won the best forward of the season while N’Golo Kante of Chelsea was awarded the best midfielder of the Champions League season.
The jury comprised the 32 coaches of the clubs that took part both in the UEFA Champions League, along with 55 journalists selected by the European Sports Media group, one from each of UEFA’s member associations.
Jury members chose their top three players, with the first receiving five points, the second three points, and the third one point. Coaches could not vote for players from their own team.
Advertisements