Italy and Argentina to Play in One -Off Final – UEFA

Champions of the European Championship and the Copa America, Italy and Argentina will meet in a competition next year in June, according to UEFA. This is the first of three-match competitions between both federations. 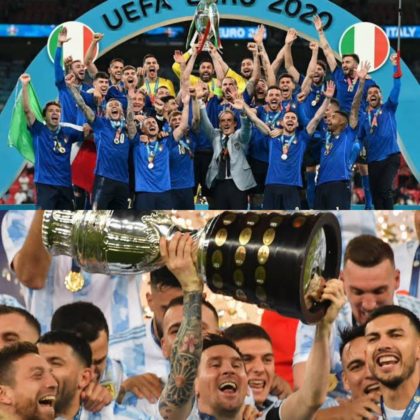 The game is a step to build a better relationship between the European football’s governing body and its South American’s CONMEBOL. According to reports from UEFA, the exact date and venue for the match are yet to be confirmed.

By reaching this agreement, UEFA and CONMEBOL express their commitment to the development of football beyond their geographical zones, as a bridge uniting people, countries, continents and cultures.

The UEFA executive committee and the CONMEBOL Council also expressed a strong willingness to continue collaborating on other issues of mutual interest going forward. The consideration signed a renewed Memorandum of Understanding in February 2020.

This decision is coming after FIFA proposed to have the world cup hosted every two years. UEFA has since the inception of the idea frowned against have the competition hosted bi-annually. The European body believes that idea will kill the sports and also be stressful for the players.