Hulk Announces Ex-Wife's Niece is Pregnant with His Child

Brazilian striker, Givanildo Vieira de Sousa, also known as Hulk, has announced that he is expecting his fourth child. He had been in the middle of the controversy when he married the niece of his ex-wife.

Hulk and his wife

The Atletico Mineiro striker confirmed the news on his official Instagram account on Sunday, September 19th, 2021. The couple posted a picture of themselves kissing each other and holding photos of them, holding the ultrasound scan photos of the unborn baby.

Hulk announced he was dating the niece of his ex-wife after ending his 12-year marriage with Iran Angelo in 2019. The striker and the niece got married in September 2020.

Today, with a heart full of gratitude to God, I come to share with you that for the fourth time I am being blessed with another child. We are looking forward to receiving you child and we love you unconditionally. Come full of health, my baby. 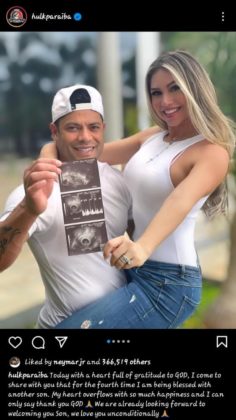 Hulk made his debut for Brazil in November 2009 in a friendly game against England and was recalled to the national team for the 2022 World Cup qualifier after five years of absence.