Giannis Antetokounmpo is one win away from his first-ever NBA title as the Milwaukee Bucks take a 3-2 lead in the Finals, winning Game 5: 123-119 in Talking Stick Arena, Phoenix, AZ on 18th July 2021. 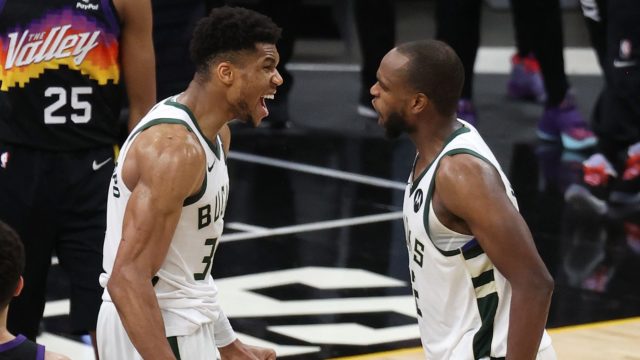 Giannis is a win Away From First-Ever NBA Championship

The Bucks wrestled their way out of an early 16-point deficit after losing 37-21 in the 1st quarter,  by winning the 2nd quarters 43-24 handsomely. The 3rd and 4th quarters were a close affair as the Bucks held off the Sun's attempts of a comeback in what was a thrilling game.

Giannis, Khris Middleton, and Jrue Holiday performed exceptionally well as they scored 32, 29, and 27 points respectively, putting the Milwaukee Bucks ahead for the first time in the series on their road win.

The Milwaukee Bucks are the first team to go down 0-2 in the series and win the next 3 games in NBA Finals history since the Miami Heat in 2006, 1977 Trail Blazers and Pistons in 1955. They all went on to win the championship.

“We kept our composure, we kept fighting. This is the NBA Finals, so you got to give everything you got. And that’s what the team did tonight.” said Giannis after the game.

The Milwaukee Bucks will be looking to seal the deal and win their first championship in 50 years in Wednesday's Game 6, 2:00 AM WAT.