Goals from Karim Benzema and Kylian Mbappe ensured France came back from a goal down to beat Spain in the final of the Nations League on Sunday, October 10th, 2020 at the San Siro Stadium.

Both teams qualified for the final following win in respective semi-final games. This is the first time both Spain and France are meeting in a competitive competition in eight years. 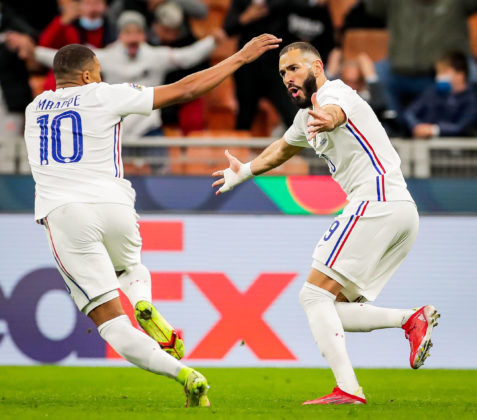 Spain survived an early scare of corner kicks in the opening minutes of the game, but the French team could convert none of those set pieces. The Spanish team finally got into the game as they were able to get strength from their wing-backs, but those chances did not break the French defense.

There were appeals of a penalty from Spain both on and off the pitch after a cross from Rodri hit Jules Kounde’s arm as he turned away from the cross, but VAR saw nothing malicious in the incident. There was really no obvious chance on goal from both sides, but the game has been interesting. The first half ended goalles.

The second half was a direct opposite from the first half, as both teams played more attacking football rather than sitting back to defend their goal post. Oyarzabal broke the deadlock on the 60th minute to give Spain the lead just a minute after France hit the crossbar at the other end. Karim Benzema cut short the excitement in the Spain camp as he found the back of the net just a minute later to level up the match.

France took the lead on the 80th minute with the goal from Mbappe, who connected to a pass from Hernandez. Spain created a lot of chances in the last minutes of the game, but Hugo Lloris ensured they did not find the back of the net.

The match ended 2-1 in favor of France. The French have now won two major competitions in three years.