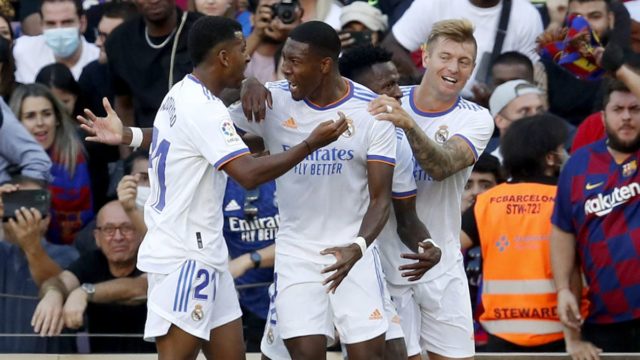 This is the biggest game in club football in the world. It was a game where Memphis Depay and Ansu Fati had to show the Barcelona fans they can fill the void left by Lionel Messi while Real Madrid fans expected Karim Benzema and Vinicius Jnr to lead the line. Ronald Koeman and Carlo Ancelotti have met four times before today's game in 2003. Koeman was in charge of Ajax while the Italian was the manager of AC Milan. Ancelotti had three wins and a draw.

The opening minutes of the game was dominated by the home team, but they forced Real Madrid into making errors but they could not turn their pressure into goal. The first real chance of the game went to the away team on the 14th minute as Vinicius latched onto shot, but the best he could get was a corner kick. Barcelona's first real chance of the game came on the 25th minute when Memphis Depay squared a pass to Fati but the ball went to Dest, who could only blaze the ball over the bar.

David Alaba silenced the home fans when he scored the opening goal of the game through a counterattack after breaking through from Depay attack on Real Madrid box. A chance fell through for Barcelona on the 44th minute as Busquets played a ball to Alba, who passes it to Fati, but Alaba blocked the effort on goal. The first half ended 1-0 in Madrid's favour.

The second half started with the same intensity as the first ended as Barcelona are tried to get themselves back into the game. Barcelona players had an appeal for a penalty on the 56th minute after the ball hit Kross on the arm from a corner kick after h jumped for the ball but it looks like Kroos was fouled in the contest.

It was almost two goals for Real Madrid on the 72nd minute, as Vinicius finds Benzema who plays it through to Mendy who could not find the net. Aguero came on for Fati on the 75th minute. The Argentine almost had a chance to get the home side back in the game as Depay sends in a cross to him but couldn't keep his header down. Vazquez scores the second goal of the game to make it 2-0 for Real Madrid.

It was a little too late for Barcelona as Aguero pulls one back for the home side as he volleys in Dest's cross to reduce the deficit. The game ended 2-1 in favour of Real Madrid.