The CONMEBOL has announced the suspension of some of its referees following the draw between Brazil and Argentina. 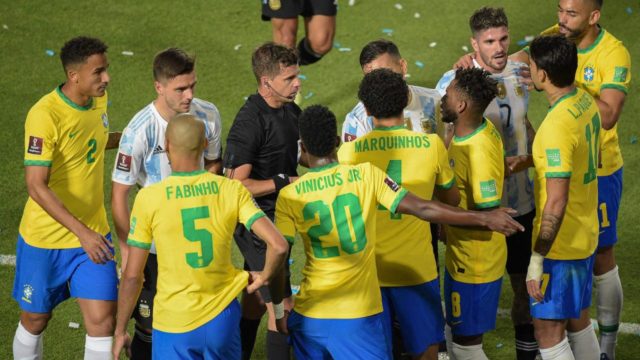 The association released a statement on Thursday, November 18th, 2021 confirming that the referee committed serious errors in the game between the two South American giants.

Center referee André Cunha and video assistant Esteban Ostojich committed a serious mistake and will now not take charge of any game indefinitely.

The performance of the Principal Arbitrator Andres Ismael Cunha Soca Vargas and the Arbitrator VAR Esteban Daniel Ostojich Vega, appointed for the aforementioned game, were technically analysed by this Committee, concluding that they committed serious and manifest errors in the exercise of their functions in the development of the match, punctually in the following situation.

Minute 33: Violent Conduct of Player #19 Nicolas Herman Gonzalo Otamendi (ARG) against an opponent putting a risk the physical integrity of the same with the use of the arm in the face.

As a result, the CONMEBOL Arbitration Committee resolve to suspend the arbitrators Andres Ismael Cunha Soca and Esteban Daniel Ostojich Vega for an indefinite period in the exercise of their functions in competitions organized by CONMEBOL.

The draw between both teams was enough for Argentina to secure a spot in the FIFA World Cup that will be hosted in Qatar next year November.