Chelsea's defender Ben Chilwell has spoken about how Thomas Tuchel helped him find his form back and how he got his place in the first team of the Blues. 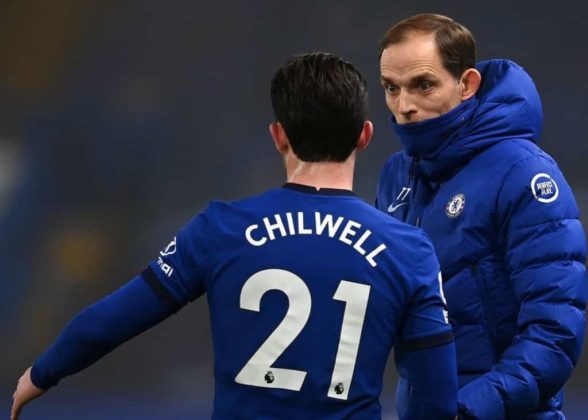 Chilwell was speaking in an interview that was reported on the Mirror Football website on Thursday, November 11th, 2021. The left-back was on duty with the England national team when he had this interview.

According to Chilwell, Thomas Tuchel told him he was working too hard to get into the team. All he needed to do was to relax and take things easy on himself.

I and the manager at Chelsea had a very honest conversation. I think it was more I was so eager to get back to playing football; it was maybe coming across that I wanted it a bit too much. He did say to me: I feel like mentally at the moment in training; you are pushing a bit too much to try to get back in the team. We love you here. We know the qualities you possess. Just relax a little. You are going to get back in. Which for me was brilliant to hear and then it was just about being patient and making sure that I was ready so that when I was called upon to play, I could do my best for the team.

It was difficult. I have been asked quite a lot recently since I've started playing and the way I have answered is cliche, but it's football. These are things that are going to happen in the majority of players in their professional career where they have low moments, high moments. The way I try to look at it, I was disappointed that I wasn't playing in such a massive competition in England. I'd be lying if I said I wasn't disappointed. But the way I was trying to go into the whole thing was that it happens to a lot of people in football. I just need to make sure I am ready. I will come through this stronger and better on the other side.

Chilwell lost his place in the England team to Luke Shaw and Karen Tripper during the Euro 2020. He also lost his spot to Marcos Alonso during the start of the season at Chelsea.