Aston Villa Football Club have announced Steven Gerrard as its new manager. He signed a two-and-a-half-year deal for an undisclosed fee. 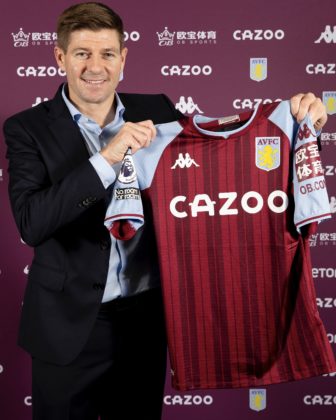 The former Rangers' coach was confirmed by Villa's website on Thursday, November 11th, 2021. Gerrard was appreciated the decision taken by the club to allow him to manage the first team of the Premier League side.

He also took time to appreciate Rangers for the three-and-half years that he spent with them as their manager, also appreciated the fans for always showing him support.

Aston Villa is a club with rich history and tradition in English football and I am immensely proud to become its new Head Coach. In my conversations with Nassef, Wes and the rest of the Board, it was apparent how ambitious their plans are for the club and I am looking forward to helping them achieve their aims.

I would like to express my sincere gratitude to everybody associated with Glasgow Ranger for allowing me to manage such an iconic football club. Helping them secure a record-breaking 55th league title will always hold a special place in my heart. I would like to wish the players, staff and supporters the very best for the future.

The 41-year-old replaces Dean Smith, who was sacked by Villa after a series of poor results in the league. Villa is currently 16th on the table losing five consecutive league games, a worse poor run in the past few seasons.

Gerrard's first game will be against Brighton at home after the International break. He will return to Liverpool on Saturday, December 11th, 2021.