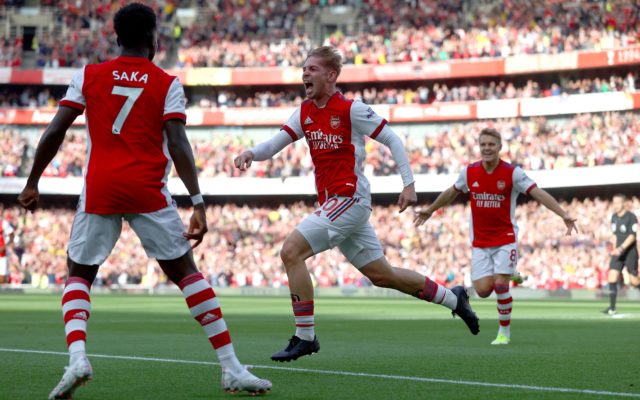 It was a game of two teams with two different stories coming into the fixture. Tottenham won their first three games without conceding a while as the Gunners lost their opening three games without scoring a goal. Spurs were on top of the Premier League table while Arsenal was bottom of the table heading into the International break.

The Gunners started this game with loads of firepower, which gave the home side a lot to cheer about. Arsenal got the first goal of the game on the 13th minute from the boots of Smith Rowe, who connected to a ball from Bukayo Saka to give the Gunners the lead. Arsenal continued to show their dominance in the game with the next chance falling to Thomas Partey, whose shot was saved by Lloris in goal.

Tottenham had a few chances of their own but Son shot did not harm to Ramsdale in goal, while Harry Kane’s effort minutes later went high and wide at Arsenal’s post. The Gunners extended their lead on the 30th minute through the club’s captain Pierre Emerick-Aubameyang, who connected to a swift pass from the scorer of the first goal.

The home fans were sent on their feet minutes later when Saka ran through Spurs defense, an attempt by Harry Kane to stop the English man, but he could not stop the youngster. Arsenal went into the break leading Spurs 3-0.

The second half was even between both sides, Arsenal sat back to secure their three goals lead, but the first real action of the game came in the 55th minute when Kane was brought down in the box by Ben White but the referee and VAR saw nothing wrong with the challenge.

Kane almost got a goal back for Spurs in the 61st minute, but Ramsdale saved his effort. The rebound ball was cleared by Tomiyasu before Son could reach it. Son finally found the back of the net on the 78th minute to reduce the deficit to 3-1. There were half-chances created by the visitors after the goal, but none could find the back of the net.

Arsenal won the game 3-1 against Tottenham. The Gunners have now gone above their rivals on the league table.