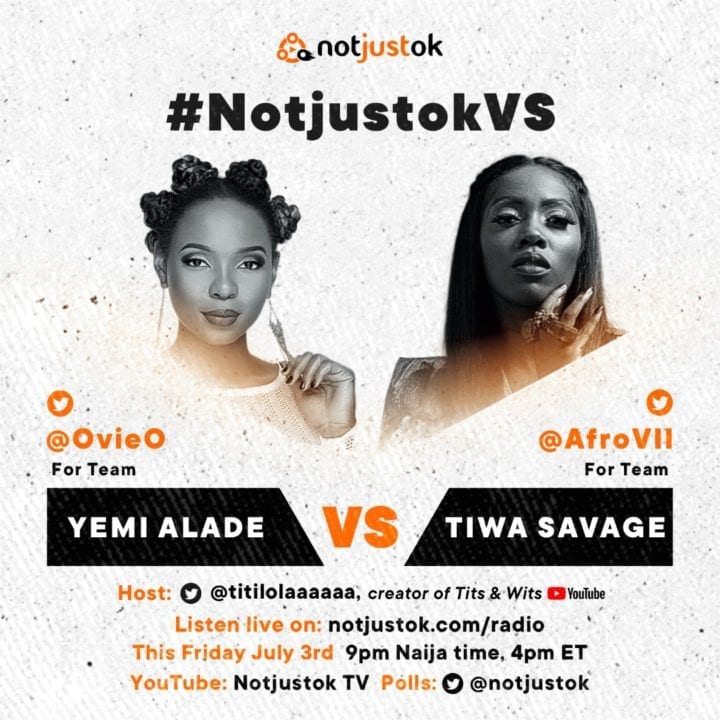 It's about time! The 7th edition of #NotjustokVS sees the two Queens of Afrobeats go head to head: Yemi Alade VS Tiwa Savage. Both superstars have stood the test of time in a male-dominated industry, with both ranking very high on Notjustok's "50 Nigerian Artists of the Decade" list.

Yemi Alade burst onto the scene after winning the Peak Talent show in 2009, while Tiwa Savage came into the game under the Mavin Records/323 Entertainment umbrella back in 2010. Since then, Tiwa has released 2 albums, 1 EP and several massive singles/collaborations, with Yemi having 4 albums and 1 EP to her name.

In terms of awards, Tiwa Savage and Yemi Alade have both had the Lion's share of accolades in the female categories within and outside Nigeria. So, expect to hear Nigerian hits, regional hits, and bonafide African hits from both A-Listers.

It promises to be an exciting celebration of both superstars.

For Team Yemi Alade, we have @OvieO on deck.

For Team Tiwa Savage, we have @AfroVII on deck.