Zlatan Ibile with his awards -Afrimma 2019

The ZANKU dance founder went home with three awards from three major categories which are Best Collab (Killin Dem), Best Song of the Year (Killin Dem) and Best New Act of the year. 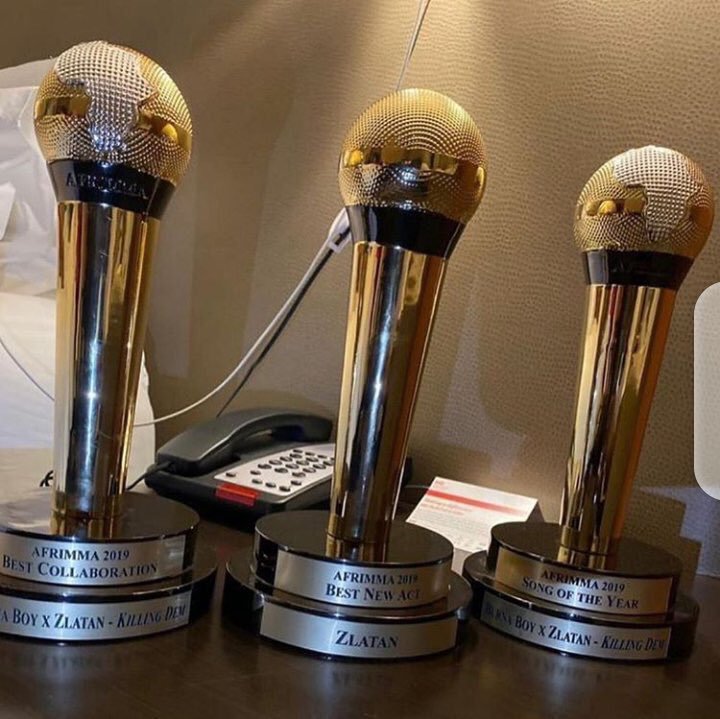 This achievement seems to have thrown the Zanku singer off guard as he went on Instagram to drop an emotional message to talk about his journey as an artist and to also, show his appreciation to not just the award organizers but also to his fans who took his name to the height it is presently at and voted for him to see this win.

My journey through music is very much a story in which reminiscing will only bring about tears of joy as a lot has happened over the years such as countless studio recordings, driving miles just to get performance slot , sleepless nights moving round Lagos and Ogun state just for my music to be heard,but overtime I want to appreciate a lot of respectable folks such as colleagues in the industry, friends, family and my team for this great support from the beginning, to my fans zlatanovaz worldwide both old and new disciples supporting my music it’s of immense joy and appreciation deep down my heart i want to say thank you all. However this is just a stepping stone , there are still a lot to be done as regarding using my music as a weapon of encouragement and support towards the society in diaspora @afrimma I want to thank you for the recognition, this means a lot and to my great fans I say thank you proper for taking out time to vote regardless of my ills . Thank you all for the support, the album Zanku is on the way let’s keep spreading a positive energy , kapaichumarimarichupako!!!!!

This is a big feat for the singer who was nominated at the recently held Headies Award but went home with no win except for his name coming up with Burnaboy's for the Best Collabo which he also won at Afrimma.