Exactly one week after the Made In Lagos album was released, BRIT announced the Gold certification of Wizkid and Skepta's single 'Energy' 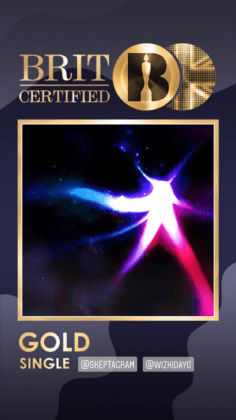 UK record labels association the BPI which administers and certifies the iconic BRIT Certified Platinium, Gold, and Silver Awards programme, took to their social media page on the 6th of November 2020 to announce the certification of the songs for the week. Smashing hit single, 'Energy' by Wizkid and British rapper and producer, Skepta was certified Gold on BRIT. The post reads:

It's time for this week's #BRITcertified! 🚨
With Silver, it’s @dualipa and @dababy and @bts.bighitofficial! 💿
Taking Gold it’s @calvinharris, @skeptagram and @wizkidayo, @idinamenzel and @auroramusic, @headieone, AJ Tracey and Stormzy, and @s_p_e_c_i_a_l_r_e_q_u_e_s_t, @diplo, and @kareenlomax! 📀
And with Platinum and Multi-Platinum it’s @nathandawe and @jaykae10, @iamcardib and @theestallion and @djregardofficial! 💿 💿