WATCH: Tems Links up with Rihanna at Fenty Event in New York

Nigerian singer, Tems attended an event for Fenty Beauty cosmetics recently when she ran into the one and only Rihanna and we have the video for you.

Tems was attending the launch of the new range of Fenty Beauty products in New York when she met Rihanna in a video that was shared by her manager. The video was shared via Instagram stories on Thursday, the 23rd of September 2021. 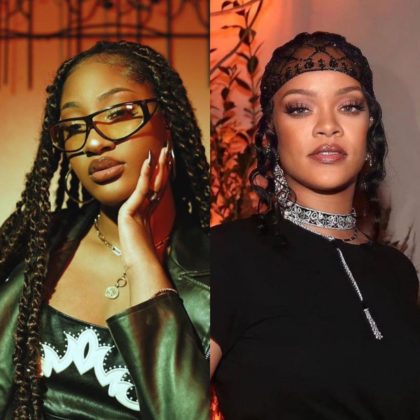 Rihanna who is originally from Barbados is a music legend in her own right, although she has not released music in almost a decade. She has instead focused her time and energy on her other brand which is Fenty Beauty cosmetics.

We recently shared a video of Tems on her first New York performance, and meeting Rihanna at the Fenty event has made her US stay even better. The singer is currently on a US tour and has performed in two venues already. Tems still has 4 venues left on the tour which include Atlanta, Sacramento, West Hollywood, and Chicago.