Upcoming R&B Act Chigratt Accused Of Stealing All His Songs

An upcoming R&B act, Chigratt, has been accused of copyright violation. The artiste, who'd begun to generate underground buzz with his sultry songs, had released two EPs: And Suddenly I Fell In Love With You and The Night I Confessed To Her. The first of those projects had been described as "a lush set of songs built around an idealised preoccupation with infatuation and orgasms."

Well, it seems the songs aren't Chigratt songs to begin with. A Twitter user, an artiste Veen XL, discovered that Chigratt had stolen songs from other lesser known artistes and was passing them off as his.

The songs belonged to a Don B and another artiste, KT, who's based in New Jersey. (I've listened, like other people, to the songs in question and they're exactly the same as the songs which are supposed to be Chigratt's). 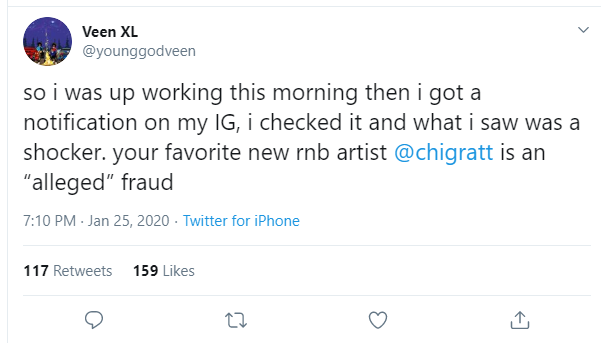 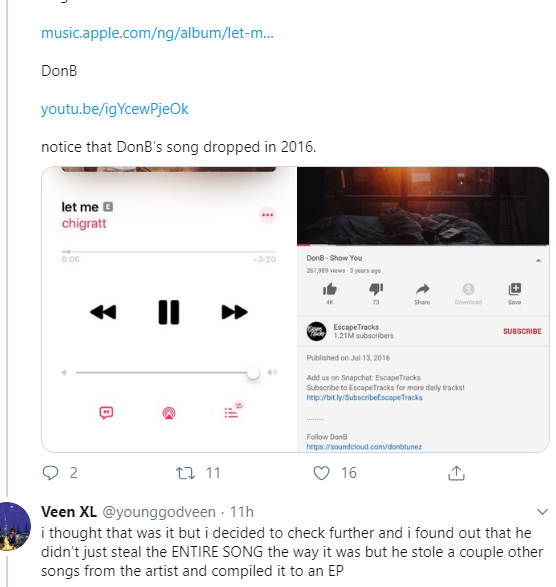 The artiste, who's under fire on Twitter by listeners who believed in "his" talent has responded with some tweets.

@younggodveen around the 25th of march, I found out that my songs have already been sold and uploaded and soundcloud and stores.. I sent out a tweet about this then, about how niggas was using my stuffs to make “name” but my mgr asked me to delete. pic.twitter.com/7NsF7JHqFr

Kimani Moore, the owner of Kimani Moore Entertainment (which represented Chigratt) has also responded, condemning the accused artiste. She distanced herself from his actions and has pledged to support Don B and KT, two artistes Chigratt stole from. (At the time of this post, she's retweeted news from KT who announced his forthcoming album.)

Please be careful who you trust. I am honestly very sad. I love my job and giving opportunities where I can especially to African artists . Putting myself and my team at risk in supporting this act was a grave mistake . A lesson I’ve learnt and a mistake I won’t make again . pic.twitter.com/gdnOxvF6Lu