Tiwa Savage's 'ONE' Back On Youtube After "Unfounded" Copyright Claims

Tiwa Savage's ONE which was dropped in November after a copyright claim by Ajibola Olumuyiwa Danladi, also known as Danny Young has been restored on the video streaming platform, Youtube.

Last year, Danny Young had called out Tiwa Savage for stealing some of the lyrics of his song "Oju Tiwon" and using it for her 'One'. This accusation got no response from the LovaLova singer and in January, Youtube brought down the song due to the alleged lyrics theft with the notice on Youtube stating that a copyright claim has been filed by a third party.

Months after the song was taken off Youtube, Tiwa Savage announced on her Instagram on Saturday, 2nd of March on the revival of the song on Youtube as the video streaming platform stated that it has found no weight to the accusations leveled against the One singer as the lyrics cannot be seen as enough evidence to file for a copyright claim. 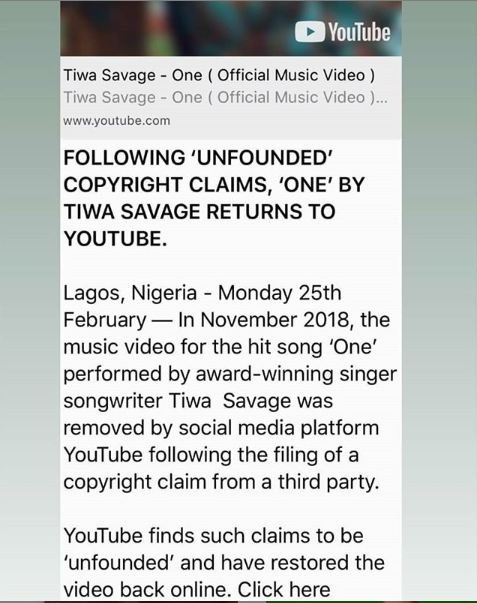 ‘One’ is produced by Killertunez and co-written by Wale Turner and Tiwa Savage.