Get the Gist on The Brighto, Wathoni and Dorathy Triangle on #BBNaijaReunion | Watch 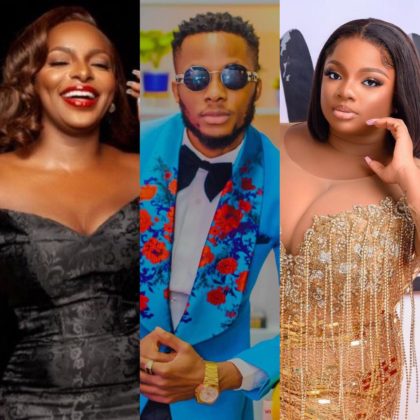 The fourth episode of the Big Brother Naija 'Lockdown' Reunion show was held on Tuesday, the 22nd of June 2021 It was centered around the love/interest triangle between Brighto, Wathoni, and Dorathy. According to Brighto, he was aware of Wathoni's interest in him. Wathoni on her own said Brighto initiated it with a kiss on the neck. She also said she felt like she was using him more than she was using him. Wathoni also revealed that something happened between Brighto and Dorathy and she knew because she was the one who changed the sheets.

When Dorathy was explaining her side of the story, she mentioned that Brighto got closer to her by painting her nails. She also confirmed that she gave him a blowj*b, but felt bad when he did not check up on her the next day. According to her, she mentioned Brighto on stage to avoid the Prince/Tbaj/Wathoni situation. Brighto said he had no intention of going into any relationship and did no give Wathoni a definite answer, so as not to break her heart. He also did not see any need in speaking to Dorathy the morning after she gave him a blowj*b.

Ka3na also spoke about the "aggressive cuddling" between herself and Praise. She said she felt she and Praise were going to work out because they were both coming from the same place. She was just leaving her husband and Praise was leaving a fiancee. Ka3na also revealed that she later found out that Praise said he was in the house to play games and could never have anything to do with her. She said he pulled him to her bed and had sex with him but he did not last five seconds. Praise said she begged him to lie for her on his interview after leaving the house.