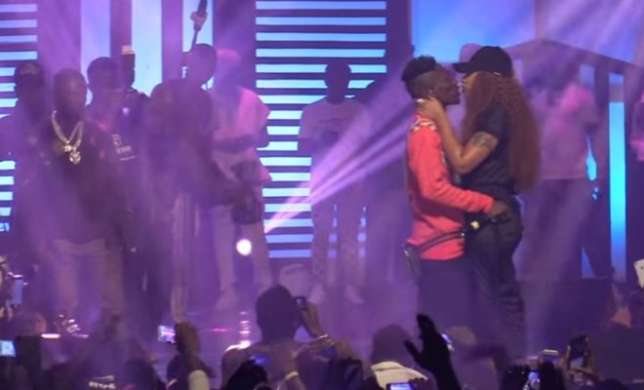 Controversial Ghanaian rapper, Shatta Wale, who was presently lyrically advised by Sarkodie has finally proposed marriage to his Babymama, Michy.

This happened last night during his performance at the launch of his most-talked-about album, 'Reign' which reportedly took place at the Fantasy Dome in Accra. The singer had to use the opportunity to kill two bird with a stone and make the day more memorable by popping the question to his Babymama who was taken aback with surprise by the question.

He had proclaimed his love for her before the entire crowd by saying; "You know I love you right?"  before bending a knee with a ring stretched forth to his excited bride to be.

Shatta Wale who had the internet laughing at him last week after Sarkodie skillfully dissed him in his Advise track sure does have a way of changing the narrative and we hope people remember this romantic Shatta than the one they trolled last week on social media.

Let's count down to Shatta Wale getting married... he has proposed to his babymama???? . . #NotJustOk