Ghanaian dancehall act, Shatta Wale, angrily burst out in court, stating that he wants to go to jail. 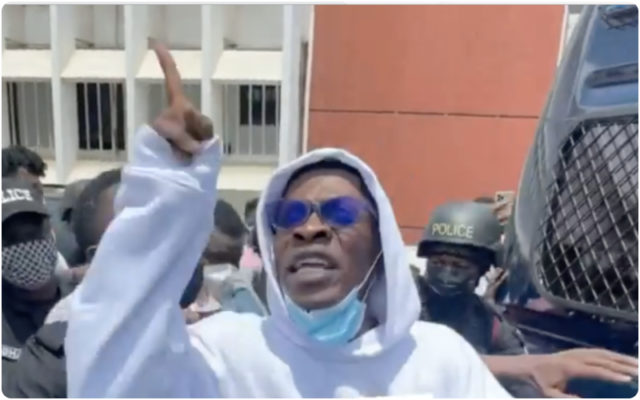 The Ghana Police Service on Monday, October 18, 2021, arrested Shatta Wale for faking reports that he was shot by some unknown gunmen, an action for which he later apologized to his fans and the people who were affected.

Shatta Wale, his public Relations Manager, Kojo Owusu Koranteng, also known as Nana Dope, and Eric Venator, known as Gangee, were all arrested on the basis of having the intention of causing fear and panic among the public.

According to reports, during the hearing of the case, Shatta Wale and his arrested team members pleaded not guilty and have been ordered to reappear before the court on October 26, 2021.

However, after the court proceedings, a video has surfaced online which shows Shatta Wale before being whisked away in a police van, angrily shouting that he wants to go to jail. He was heard in the video saying:

...Just send this to them, tell them I want to sleep in jail for this ... fake prophets