In what appears to be an amicable settlement to what could have otherwise become a full-blown court case, Punch Newspapers has retracted a story it published on 8th of July 2018, where an upcoming artiste granted an interview and accused popular and multiple award-winning artiste, 2Baba of stealing his song.

Innocent Idibia (aka 2Baba, aka 2face) had released a chart-topping single in June titled ‘Amaka’. Following the wild buzz that greeted the release of the song, the upcoming artiste who had dropped a song with the same title a few months earlier, accused 2Baba of stealing the song and releasing as his own. The interview which was originally published in the Punch newspapers quickly went viral.

However, Punch newspapers has subsequently taken the story down from its website, and issued a ‘retraction and apology’.

The retraction which was published on Sunday August 19th 2018, read:

In the Sunday, July 8, 2018 edition of the Sunday PUNCH, we published without due verification a story in which Analike Okezie (Yoko B) accused 2Baba of stealing his song, Amaka.

We hereby retract the said story and tender an apology to Mr. Innocent Idibia, aka 2Baba, who we hold in high regard. 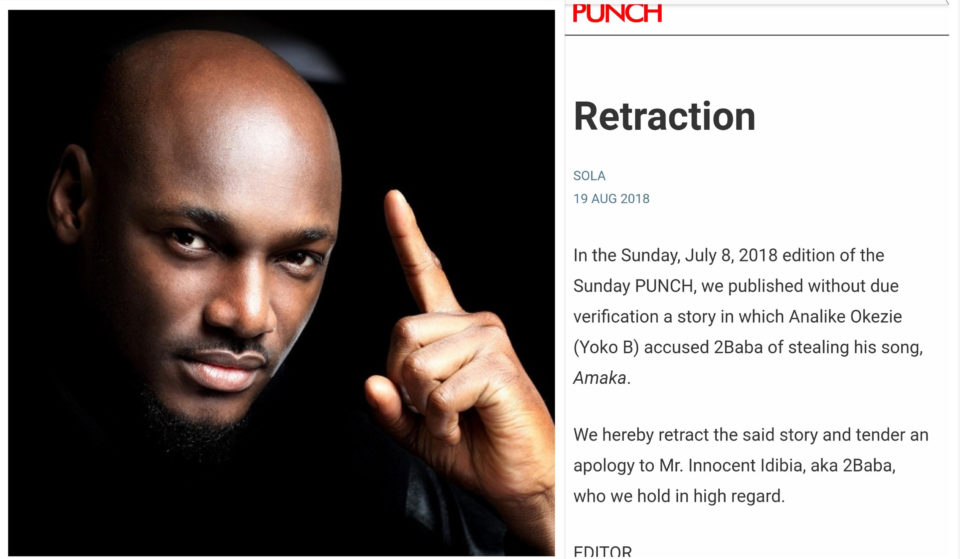 A representative of 2Baba’s record label, Hypertek Digital stated that legal representatives of 2Baba had written to Punch Newspapers, asking them to take down the story or be sued. The Newspaper eventually took down the story from their online platform, and issued the retraction and apology.