Olamide Performs Medley of "Rock" and "Julie” for Audiomack | WATCH

Nigerian rapper, Olamide recently performed a medley of his hit song, Julie and Rock off his last album for his Audiomack's Fine Tuned session.

Olamide teamed up with music composer and pianist, Matt Composure for his performance of the Rock and Julie medley on Audiomack. The video was shared via Youtube on Tuesday, the 10th of August 2021. 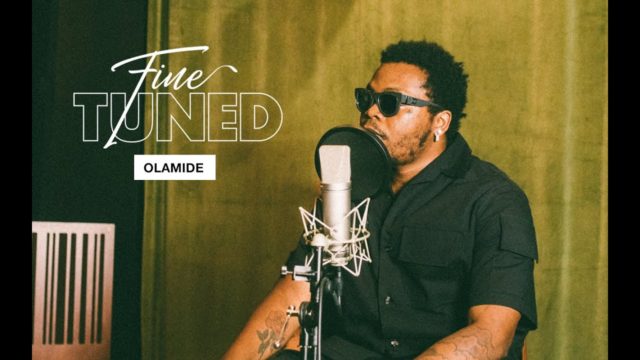 Olamide released his most recent album UY Scuti last month and the two songs he performed for Audiomack remain prominent among the fan favorites.

Produced by fast-rising beatsmith Eskeez, Julie serves as the fourth track on the album. The music video for the songs follows the rapper’s desire for an affectionate relationship with his lover, void of deception. The visuals, however, ends on a melancholic note. Rock which was dropped as the lead single on the album also has a video out and was produced by the same Eskeez.

Olamide who is on a promo tour in the US has been on different platforms, just like how he performed the Rock and Julie medley for Audiomack. He also spoke with Apple Music recently about wanting a change being the reason for creating his UY Scuti album;

This time around, I'm just switching the gears and moving it up a notch, a little bit. Because I've always wanted to tap into different elements of everything I feel on the inside, and just live my life to the fullest. So, I might as well just try something new entirely.

UY Scuti has been the No. 1 album on Audiomack since dropping June 17th, racking up over 58 million plays in under two months on the service.

The performance falls under Audiomack’s “Fine Tuned” original music series which sees the hottest artists across their globe strip their most popular tracks down to the bare essentials for a once-in-a-lifetime performance.

“Olamidé is a once-in-a-lifetime talent,” says Jason Johnson, Vice President of Marketing and Brand Strategy for Audiomack. “He is one of the highest streaming Afrobeats artists on our platform. He has amassed over 250 million + streams and his most recent album UY Scuti has been number 1 on the platform since its release on June 17. We are looking forward to helping him reach new fans globally and provide a platform for his existing fans to experience his music in new ways.

Olamidé is one of Africa’s biggest music stars, and the continent’s most successful and influential rap act, with over 1 billion streams worldwide. He’s also the founder of YBNL Nation, which he’s grown into one of Africa’s most influential and respected record labels since 2012, launching the careers of artists such as Fireboy DML, Adekunle Gold and Lil Kesh. In 2020, YBNL announced a new partnership with EMPIRE, which has allowed the U.S.-based indie powerhouse to significantly expand its presence in Africa. UY Scuti, which takes its name from the largest-known star in our universe, sees the street rap legend and afrobeats stalwart expanding his sound in new directions, pulling inspiration from dancehall, reggae, amapiano and alté, for his most intimate and personal project to date.