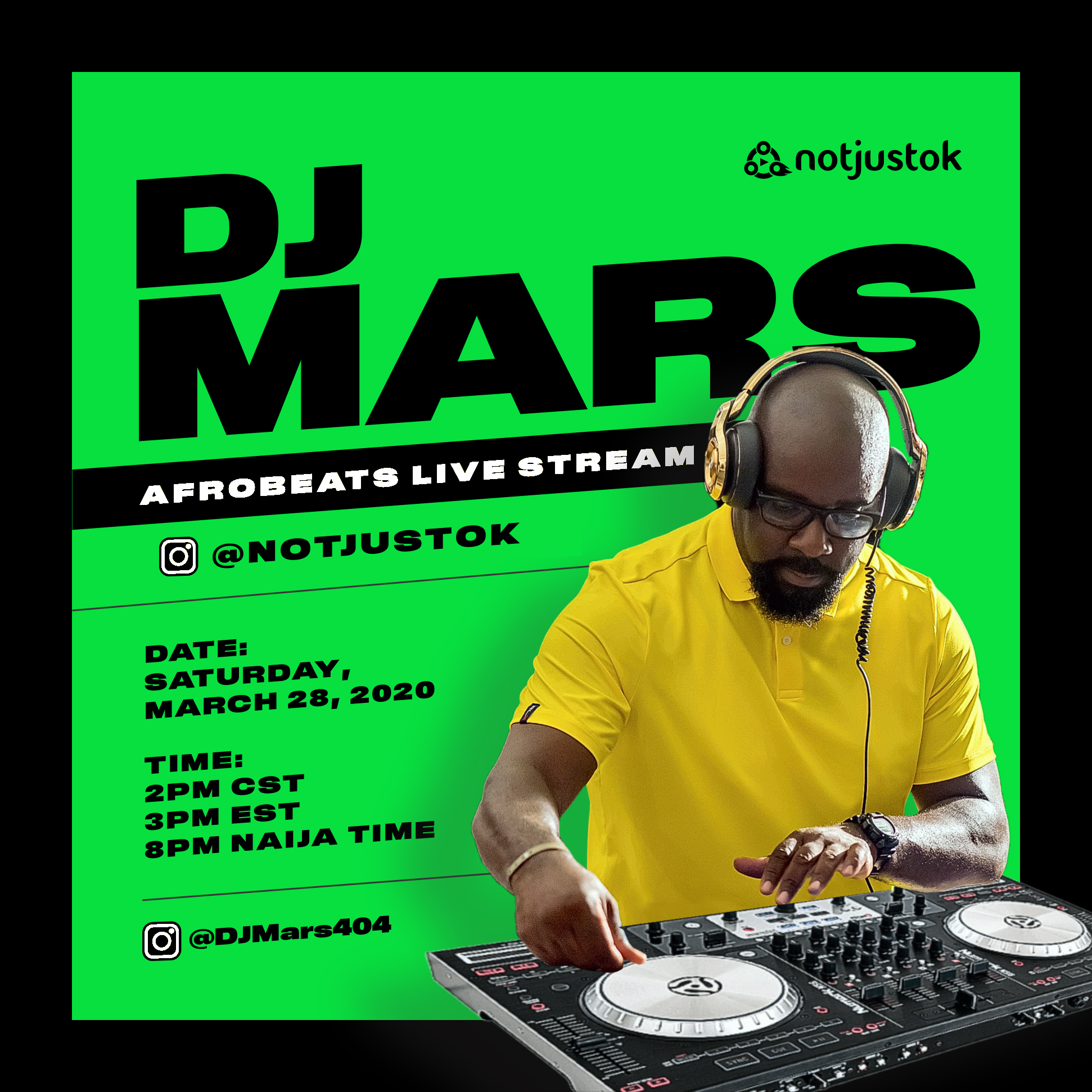 The legendary DJ Mars (Outkast, Usher, Ne-Yo, Ciara), one of the pioneering hiphop DJs in Atlanta, is doing a 2-hour Afrobeats set LIVE on the @notjustok Instagram page this Saturday, March 28 at 3pm EST/8pm Naija time.

After studying the style and tradition of the greats, DJ Mars perfected his occupation and his career began to soar. An up and coming rap group simply known to the world as Outkast tapped DJ Mars to be their original tour DJ.  After gaining recognition within the ranks of LaFace Records in Atlanta, he quickly signed on to tour with Usher. Since that time he has been the tour DJ for artists such as Monica, Kelis, Ne-Yo, Ciara, and Keri Hilson. Mars also finds time to pen a column for Vibe Magazine and doing what he does best keeping the floors packed with people dancing.

“The pinnacle of my career for me was controlling a crowd of 300,000 disorderly people in the UK at the V Festival and transforming disorder into a party with my skills.  At that point I knew I had it!”.

Instead of merely playing remixes, the Superfriends President has done a few of his own. Including a re-edit of the Dj Chuckie hit "Let the Bass Kick". This time Dj Mars brought along longtime friend and super producer Jermaine Dupri to add a little hype to the record.

In 2014, DJ Mars was proud to deliver "The Art Behind The Tape" Book.  The first book dedicated to the Mixtape Culture. It is a collection of interviews and artwork compiled by DJ Mars and #theartbehindthetape Team- Bril Ndiaye, Maurice Garland, and Tai Saint Louis.

“At its core hip hop is all about independence and self expression. I feel it is my duty as a card carrying member of the hip hop community to tell this story the right way!”

This Saturday afternoon grab your passport and fly with me back to the continent for the worlds largest Afrobeats dance party! Hosted by @notjustok and yours truly. We will be transmitting live from the @notjustok page,so follow them ASAP! I am playing everything from Fela,to @waleturner yes a live two hour Dj set with. I am playing nothing but Afrobeats! Tell a friend to tell 10 more friends. Let’s meet at the airport and Take Flight! The plane takes off at 2pm CST 3pm EST 8pm Naija Time See y’all Saturday!