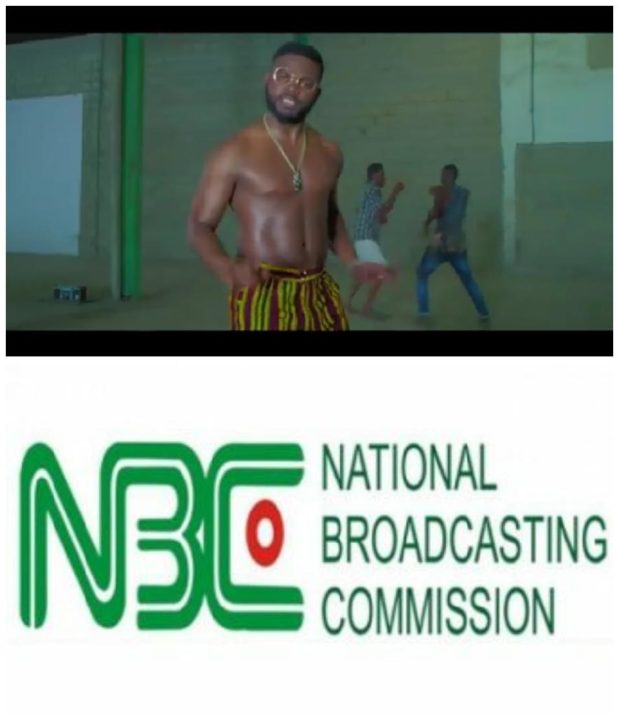 Songs by some Nigerian artistes including "This is Nigeria" by Falz the Bahd Guy have been flagged as songs that are indecent and contain vulgar lyrics hence not fit to air according to NBC.

The National Broadcasting Commission in Jos has released a statement against a radio station accusing them of airing songs with vulgar languages, an act that goes against the modus operandi of the broadcasting commission.

The statement in form of a letter sent to a station has been going round the internet revealing "vulgar" words such as  “This is Nigeria. Look how we living now, everybody be criminal” "Girl you dey make me kolo, shaking your a** like kolo" which is in contravention to section 3.6.1

Calling these lyrics in This is Nigeria, which happens to be an important part of the song, "Vulgar" is another way of banning the song itself although that wasn't clearly stated in the letter.

Falz who posted the document on his page couldn't help but laugh with emojis because he wasn't expecting any of the words in his song, "This is Nigeria" to be seen as "vulgar".

According to the letter, the station, which wasn't mentioned, had been warned on the 6th of March about Falz's "This is Nigeria" but it looks like the station didn't get the message as NBC feels the rule was still violated, hence the station is expected to pay a sum of one hundred thousand naira two weeks after they've been served the paper.

The letter reads in part;

The commissionhas observed that with great concern the continuous airing of vulgar and indecent lyrics inspire of warnings both verbal and written to the station. 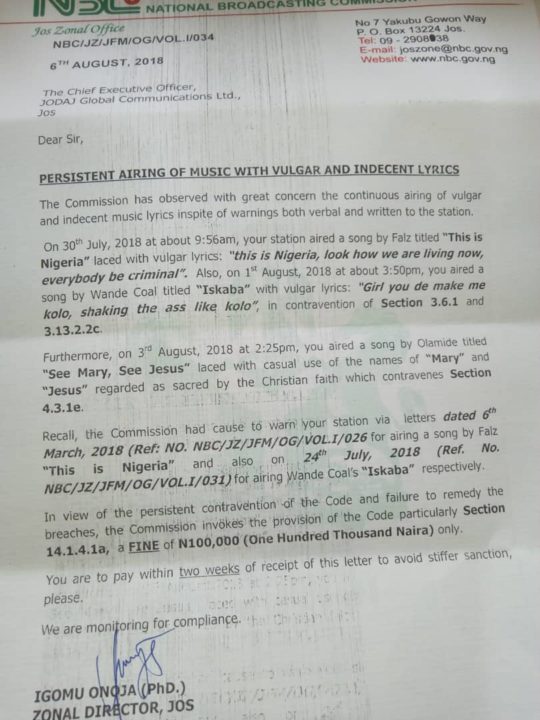 This is Nigeria is a song that scrutinizes the affairs of the country, revealing its unappealing state to the world. This song took Falz from being just that artiste with humorous lyrics to an activist using music as his tool to highlight the ills in the Nigerian society. This song got people placing his new style beside Fela's who questioned and criticized the Nigerian government during his time.

This is the first time Falz will be coming under the NBC's watch, and calling lyrics like  “This is Nigeria. Look how we living now, everybody be criminal” is another way of stating that Nigerian artistes should not question the activities of the government or have opinions about who they are.

This for Falz is unlike Olamide who is already familiar with the reproach of the broadcast commission and how often they have banned his songs; from "Wo" to "Science Student". Wande Coal seems to also be new to this experience as they also frowned at the lyrics of his "Iskaba".

Although this paper came from their zonal office in Jos, there's no words if this is a national warning or just for broadcasting stations in Jos.