SHARE
This Week's Episode Features a Conversation With Mayorkun, the 5 Hottest Tracks of the Week, and Special Guest 2020 BET Award Winner Sha Sha! 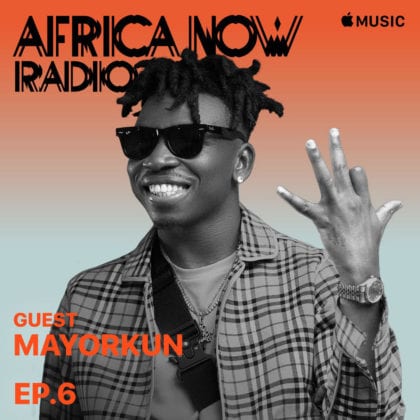 Advertisements
Tune in to 'Africa Now Radio With Cuppy' This Sunday, July 5th at 2p Lagos/London / 3p Johannesburg/Paris / 6a La / 9a NYC Only on Apple Music

Mayorkun Tells Apple Music About His Relationship with Davido

"Aside that, aside the whole music thing, he still is like our mentor generally. We still go to him. The first time we made a song I think it was 'Bobo', so we felt like if we are going to do something else again, we shouldn't fall short of that expectation."
Mayorkun Tells Apple Music About the Inspiration Behind New Single "Betty Butter"
"There's this poem when I was a little kid, when I was in school. The title of the poem was 'Betty Butter.' It was, 'Betty Butter bought some butter, but she said, 'The butter's bitter, if I put it in my batter…’ "

"So 'Tender Love' I remember it was one of the chilled days. It was actually a Sunday and Kabza was in the studio. Maphorisa has created a really awesome hub where people come and record in his place. So we were out there and Kabza starts a beat then poor Maphorisa puts in his own vibe. And when I listened to that song, it felt like love. So I just obviously tapped into my own personal experiences. The song was actually initially supposed to be called 'Me I Love You’ actually ‘MILY' but Maphorisa at some point had like a mix that was online and the fans took it and chopped it out from that mix and then they named it. They literally named it and that was it. That was the name."

"My journey started back at home in Zim, and then I remember, Audius Mtawarira, the mentor I was working with at that time, partnered with a group called Anashe in the States, and they had like a couple of producers that they knew that we wanted to work with in SA. So we started just working with producers,I was just in and out South African and Zim, and that was like in 2017. And in the midst of all of that, my cab driver actually asks me, obviously what I do and all that stuff, and I tell him I do music. And then he's like, 'Well, I know DJ Maphorisa.' And I'm like, 'Wait, what?' And he was like, 'Yeah, I sometimes transport him here and there.' And he was like, 'Okay, cool. Well, you know what? One evening when you're free, we can just go out there and we can meet DJ Maphorisa, and you can play him something.' And that's exactly what happened, and the rest is history, literally.”