Lojay Describes The Experience of Making Music with Wizkid | WATCH

Nigerian singer, Lojay in a new interview with Clout Africa explained that working with Wizkid on his debut EP felt right and the synergy was amazing.

Lojay told Clout Africa in a new interview that working with Wizkid felt really natural and the Made in Lagos star asked to work on the project himself. The interview was shared via Youtube on Wednesday, the 3rd of November 2021. 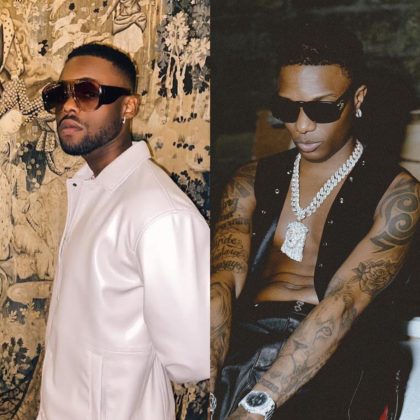 Lojay released a collaborative EP titled LV N ATTN along with Sarz back in July this year. The project also had one featured act in the shape of Wizkid who added his vocals to the title track. There is a video of Lojay showing his reaction when he heard the Wizkid verse for the first time. During one particular interview on TVC recently, the singer had revealed just how much of an influence Wiz was in him taking up music as a career.

READ ALSO: Watch Lojay Explain How Wizkid Inspired Him to Take up Music as a Profession

Speaking to Clout Africa during his interview, Lojay explained how working with Wizkid came about. He revealed that the synergy when he met Wizkid was really amazing and Wiz was the one who asked to be on the song himself.